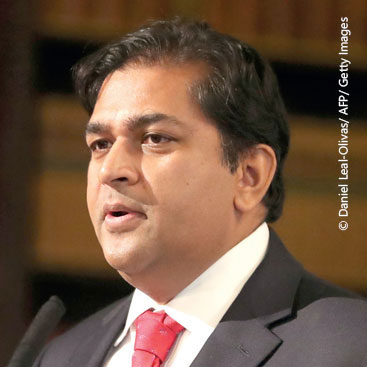 FROM early 2016 until March this year, Shan­ker Singham was director of economic policy and prosperity studies at the Legatum Institute, leaving to join the Institute for Economic Af­fairs (IEA) as director of its international trade and competition unit.

These titles barely credit the influence Sing­ham has as one of the foremost experts and theorists in the UK on international trade and globalisation – and right now, as a leading Brexit policy expert with the ear of some influ­ential figures in Theresa May’s government.

He is disparagingly referred to by Remainers and journalists as “the Brexiteers’ brain”, but in fact was a remainer himself prior to the EU referendum. Since then, he has devoted his time to advising the government on negotiat­ing the best terms of trade in its separation from Brussels, based on the reality of the situa­tion in which the country finds itself.

Singham, whose parents arrived in Britain from Sri Lanka, was born in the UK in 1968. He attended the prestigious St Paul’s School in London, later reading chemistry at Balliol Col­lege, Oxford, before changing direction and training as a lawyer at the College of Law (as it then was) in Guildford, and afterwards in the US at the University of Miami. He has dual US and UK nationality.

He was working as a lawyer in Florida while writing his book, A General Theory of Trade and Competition (2007), in which he developed his economic and policy ideas, returning to “first principles” to recombine divergent schools of thought around markets and competition into a coherent theory of international trade.

As a practicing Catholic, Singham appears to equate capitalism and free competition with spiritual enterprise engaged in for the general prosperity and advancement of humanity, and his over-arching concern – the alleviation of global poverty: “Proponents of open and com­petitive markets must make the moral case for markets because of their poverty-alleviating power, and must also make clear the immorali­ty of policies that promote the corrosive power of monopoly, distortion and crony capitalism,” he wrote in 2016.

To be both pro-capitalist and pro-globalist is an unpopular position in these confusing times, but Singham seems to strive for a clear distinction between open and fair competition, and markets rigged in favour of corporations using porous borders and highly-mobile capi­tal flows to depress workers’ wages and max­imise profits and minimise tax liability.

The superiority of a free-trade zone over a customs union is why Singham is now helping to engineer the UK’s optimal exit from the EU.