Bhandari is leading the charge for a more inclusive society 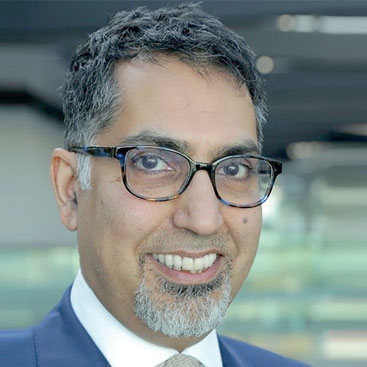 SANJAY BHANDARI strides into the EY of­fices in the More London building down by the river, looking as if turning 50 has injected new energy and vim into him.

This is the boy from Wolverhampton whose father died when he was 15, and who went from council house to Peterhouse, Cambridge University, turning himself into a top lawyer at the cutting-edge of the technology revolution at the start of the century.

Bhandari’s far-sighted recommendations about things like email and data security 20 years ago are now laws of the land, and he is senior partner in the global professional services company, one of the Big Four along with PwC, Deloitte and KPMG, where he went first after leaving a big traditional law practice.

He has overcome the twin pressures of ca­reer building and a background that led, at one point, to an alcohol-fuelled divorce and a stint of onstage soul-baring as a stand-up comedian. Maturity has contributed to a relaxed and as­sured businessman who is certain about who he is and what he wants to do.

Bhandari was head of markets for EY’s fraud investigations and disputes services, but has now moved on to other things. “I’ve had a few different roles,” he says. “Last year I was on secondment into our tax team and now I’ve come back into our assurance service line – as­surance is about 4,000 people. That covers au­dit, that covers our forensic team, which is where I came from originally, and it covers our financial accounting and advisory team.”

In addition to his formal roles, it is Bhandari’s sustained efforts in the area of in­clusiveness that marks him out as a game-changer. He didn’t invent the firm’s diversity strategy – the Safe Asian Network was pre-ex­istent – but he introduced the idea of increas­ing the percentage of BAME employees and partners and started setting some targets (“not quotas”). The business has seen the levels of minority employees rising ever since.

“We’re up to about nine per cent overall across all our partnerships. But the rolling three-year 10 per cent target we’ve been hitting pretty regularly, and I think last year it was about 11 per cent,” he says. “But that rolling target is designed to increase the over­all representation in the partnerships, and that’s gone from three per cent to nine per cent.” So that’s three times as many BAME part­ners, or a 300 per cent return, as an account­ant might put it.

Turning 50 is a good time to reflect on what comes next. Bhandari is now in a position where he can survey the landscape of his life. “I make a choice to be here at EY, because every day that’s a decision. I have plenty of op­tions to go and do other things,” he says. “Look, if I really, really wanted just to make money, I wouldn’t be here. I would be an en­trepreneur and I would do it myself… What I’ve found works best with me is three-to-five-year goals. It’s subconscious, I think, when you’re younger, but now it’s much more con­scious because I can see that works.”

It’s this balance between reflection and am­bition that now informs his thinking. “I sup­pose a council estate, school-fees paid and all that kind of stuff – you think, actually, what kind of difference can I make to society?” he asks. “When you come from poverty, it’s about financial security, and when you’ve got that, it’s more about enjoyment. And now I’ve turned 50, it’s about leaving a mark and a legacy for other people. Doing things I enjoy. And the heritage of the Asian community is where some of that comes from: you have a duty and a responsibility to help those around you.”

Bhandari grew up knowing life was hard but his devotion to diversity is born not from char­ity or liberalism but from the lessons of hard work and sound commercial sense. “It makes our business more successful,” he says about inclusion. Empirical research backs him up regarding the “diversity dividend”, proving that more women, brown and black people in the team improves the bottom line. “Where we’ve had some of our modest success has been to turn it into a business case of why we are doing this, and it connects with our cli­ents and customers and stakeholders,” he says. “That means I can leave behind a better firm.”

He’s been there 12 years and is not leaving yet, but Bhandari is becoming involved with causes and concerns relevant to him. Recently he worked with the BBC on a project aimed at addressing the problems of alcoholism in the UK’s Punjabi community and beyond. “Drinking is a competitive sport for young Punjabi men. ‘I can drink you under the table’ is quite a common phrase and there is a sort of braggadocio around it and a connection to masculinity,” he says, speaking from experience.

That involvement came alongside dealing with mental health and racial abuse in other areas, for example, in his beloved arena of soccer. In fact, Bhandari has been secretly involved with professional football for some time. “So I’ve been doing it for around three or four years and not talking about it too much,” he says. “I hinted at it last year but I can prob­ably talk about it a bit more this year, which is the work we’re doing with the Premier League – supporting them on their equality stand. I’m one of the panellists [on the Premier League Equality Standard Panel]. Garth Crooks, he’s our chairman, made a comment on our press release, so it’s a little more public now.”

Racism persists in the world of soccer – Bhandari recently invited Paul Canoville, Chelsea’s first black player signed back in 1981, to EY to talk about the devastating effect that bigotry had on him and his career. In 2018, after nearly 40 years, work is still ongoing to level the playing field, so to speak. “We’re helping each Premier League club with how they achieve the equality standards that the club owners and chairmen have agreed to and set out as their idea,” says Bhandari.

It’s an important role and he loves talking about it – there is clearly a great pride and buzz for him being near anything football-re­lated. This also gives another hint about what Bhandari sees himself getting involved in, per­haps even professionally, in the future. “I can’t imagine after I finish at EY that I’ll finish working. I’d love to make my hobby my job,” he says wistfully. “Ultimately, I suppose I would love to work in football. That’s where I don’t see many people who look like me. One of the reasons I wanted to be a partner was I couldn’t see many people who looked like me.”

Bhandari says he doesn’t have the money to buy a club. But being a chairman, for example, doesn’t necessarily entail being an owner. “Sport and football has been one of the con­stant passions of my life. Doing something in that would be fantastic. I don’t know what, but making some contribution.” It is difficult to imagine it not happening.