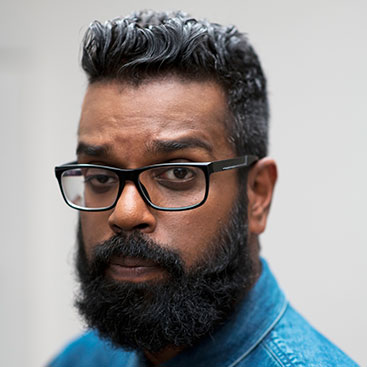 “HERE be the Ranga, rocking at the Scala, bringing the heat like a chicken tikka masala.”

That was the fateful line that may have end­ed Romesh “Ranga” Ranganathan’s career as a freestyle rapper in 2004. For as he later admit­ted, chicken tikka masala is by no means a spicy dish.

The incredible journey that has catapulted him from Crawley, West Sussex, to almost in­ternational fame began with the arrival of his parents from Sri Lanka. Ranganathan was born in 1978 and grew up in Broadfield, becoming a pupil at the local Hazelwick School. After studying at Birkbeck College, London Univer­sity, he returned as a maths teacher and met and married his wife, Leesa, who taught drama there. They now have three children. Ranganathan claims that even though fame has touched him, he gets noticed more often in Crawley for being an old Hazelwick teacher than a comedian.

It was nearly a decade after his “chicken tik­ka masala” throwdown (the “maths years”?) that Ranganathan turned professional, begin­ning his TV career with appearances on Live at the Apollo in 2012, soon followed by an in­ternship at Mock the Week.

Next year may prove to be Ranganathan’s big year, after a flurry of TV and live activity in 2018 that has achieved a critical mass of public recognition for a great comedy talent.

He is all over the place at the moment. His new series on Dave, Judge Romesh, is being heavily promoted, on the heels of Just Another Immigrant (for Showtime), a 10-espisode reality show that introduced him to US audiences – as an unknown Brit comic who attempts and fails to fill Los Angeles’s 6,000-seat Greek Theatre (397 people turned up).

A slew of other recent TV shows, including Asian Provocateur (a go-back series set in Sri Lanka for BBC Three) and The Misadventures of Romesh Ranganathan (a holidays-in-hell ve­hicle – Haiti, Albania, Ethiopia – for BBC Two) led to this heightened exposure. His beard heightens the comic misalignment between authority and pratfalls. Hirsute and wearing heavy Michael Caine specs, he is much funnier than he was with stubble.

Tellingly, Ranganathan also hosted a less-widely promoted (because more “in-crowd”) interview show, Romesh: Talking to Comedians, for BBC Three, which demonstrated the poise and the carefully-honed persona he has devel­oped over the years.

Comedians, usually monsters of insecurity and narcissism, duel helplessly with each other whenever they meet; but in no instance during the entire series did Ranganathan lose control of the narrative to the considerable parade of egos that sat with him at the table.

In addition to all this, new TV series are up­coming – a topical comedy panel show pilot for BBC Two called The Ranganation was an­nounced in May, and The Reluctant Landlord (for Sky), based on taking over a pub (which Ranganathan briefly did when his publican fa­ther died five years ago) is in production.

The only risk for Ranganathan is overexpo­sure. He brings to his comedy the cruel jabs and weary scepticism that are second-nature to all good maths teachers. He also embodies the certainty of being ethically correct, which is the mitochondria of his humour: it is when he detects anything that is out of line, or devi­ates from his laser-beam idea of what is nor­mal, that his funny observations commence.

In Ranganathan’s well-crafted idea of “proper” standards there is an echo of Tony Hancock, and in his character’s strict but self-centred morality there lurks some of the genius that John Cleese fed into the creation of Basil Fawlty. His best sort of delivery is a deadpan hyperbole: “It’s something I’ve always wanted to do. It’s almost like a dream come true in many ways,” he says, standing plastered with sheep-dung in a remote and drizzly Albanian field.

This is all helped by Ranganathan’s use of the ptosis (drooping eyelid) in his right eye. He has a habit, when expressing disbelief or dis­approval, of turning his head slightly to the left and looking down his nose at the camera, which gives him the hilariously haughty expression of an unimpressed 18th century … judge?

The only problem with Judge Ranganathan is that there are not enough close-ups.