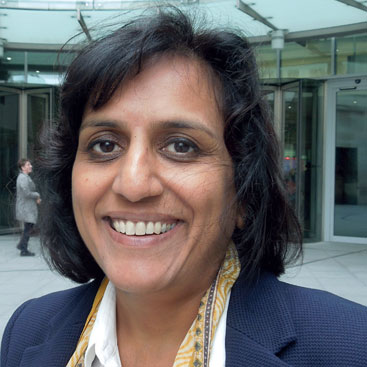 ORDINARY people sometimes do extraordi­nary work and journalist Ritula Shah gets im­mense pleasure in documenting the lives of such people who risk everything for the causes they believe in.

The search for such noteworthy people has taken Shah and her news shows to a variety of unlikely places, including a building site at the back of a mosque in Tehran to under a table on a rooftop in Moscow. She has travelled to a number of locations in India, South Africa, Eu­rope and the United States to telling the sto­ries of those people who show how the world is changing for good.

She is also passionate about giving voices to people, especially women, who don’t have ac­cess to education and healthcare. And it is this sense of responsibility that has made Shah an ideal candidate to be an ambassador for the British Asian Trust, a charity supported by Prince Charles that works towards elevating the lives of the underprivileged in south Asia.

But all this would not have been possible if she had heeded her father’s advice to become a lawyer. However, he was incredibly proud of her career choice as she succeeded in what was clearly a difficult business.

“I thought journalism wouldn’t be for peo­ple like me,” Shah said. “From the kind of background I came from, people didn’t do stuff like that. But my friends at university were fantastic. They were like, ‘you should do this, you can do this.’”

The 51-year-old, who confesses that she talks too much, grew up listening to the radio. According to a bio on BBC, Shah has been lis­tening to Radio 4 ever since she can remem­ber, and she woke up with Jack de Manio.

She became part of the Radio 4 production team, based in Birmingham, as soon as she