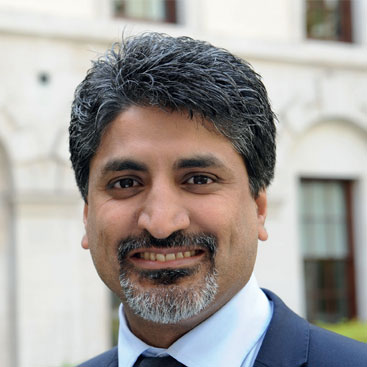 FROM humble beat bobby to human resources (HR) supremo who was responsible for gov­ernment workforces – as career progressions go, Ravi Chand’s has been as unusual as it has been successful.

He spent 10 years as a frontline police offic­er in Luton before becoming head of equality at Bedfordshire Police. That experience fired in him an interest in matters to do with personnel, and on leaving the police after 14 years, Chand worked as a managing consultant with a large search and selection consultancy owned by a FTSE 100 company. While in the private sector, he re­cruited and coached CEOs and directors for public and private sector organisations.

With a growing reputation in his chosen field, Chand become director of talent and di­versity at the Home Office and an HR adviser to government ministers. In April 2014, he became HR director at HMRC with responsibility for the workforce management of 66,000 employees. In April 2018, Chand was appointed chief people officer at the Department for Interna­tional Development, with responsibility for people, operations, IT and systems in a government body that operates across 32 countries.

As one of the country’s top experts on hu­man capital, Chand has also been at the fore­front of debate about the impact of digital-pro­pelled automation on jobs. A major part of his remit at HMRC involved downsizing and he has not been slow to draw attention to a future where machines could oust people from the workplace.

“We are entering an age where the vast ma­jority of jobs could be automated,” he points out, adding that the outcome of an increased use of robots, algorithms and machines could be either liberating or a nightmare.

While some believe automation will bring about a utopian future of people working less hours in more meaningful roles, for many, “the very idea of automation inspires fear, threaten­ing our place in the world and professional fu­tures”, says Chand.

So what is his advice to employers? “Many will find themselves leading HR functions of businesses which could, in five years’ time, essentially be run by a computer, with a skeleton workforce to oversee and di­rect it. For HR leaders this technological ‘un­employment’ provokes the urgent question of what is to be done with all those people? Can valuable work still be found, or will thousands of people be displaced?”

Chand’s conclusion is that it is the role and responsibility of employers to reshape the fu­ture of their workforces in a responsible way. “We must redefine how we work, where we work and crucially, why we work… workforce planning has never needed to be so agile. Automation offers many business advantages, cost saving and higher productivity among the most obvious,” he explains. “There is also potential to improve working lives, and enable your workforce to deliver more meaningful valuable work.”

Chand has sat on a number of boards, in­cluding working as a nominated commissioner appointed by the home secretary to lead a for­mal investigation into the police service in England and Wales.

As a fellow of the Chartered Institute of Personnel and Development, he was recognised in the honours list in 2002 with the Queen’s Po­lice Medal for distinguished service, and in 2011, when he received a CBE.