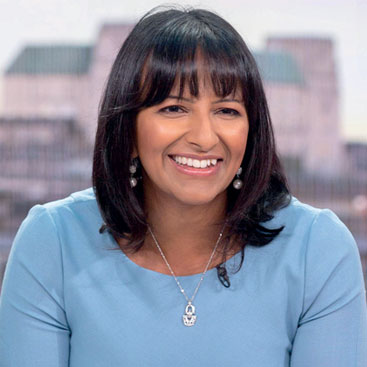 NO ONE would imagine that a show focusing on a bunch of experts helping British families to eat healthy and save money would have a connection to mental health.

The show captures the anxiety parents face while bringing up children and, according to Singh, who herself is a mother of one, it high­lights the tug of war they face about whether they are doing the right thing by their kids.

The struggles to make ends meet every month, and the doubts some couples deal with as they fight to keep their marriage from falling apart are topics that crop up on the show.

“Long-term guilt, fear, worry, and not eating properly is massive in the sense of mental health,” said Singh.

She could identify with the concept of the programme as she herself has experienced the struggles of working a full-time job and han­dling a family, she revealed.

“You’re just exhausted by the non-stop na­ture of trying to do everything and feeling like you’re not getting it right.

“Then there’s the guilt – you feel like, ‘I wish I had more energy. I wish I had a bit more patience with the kids, I haven’t seen them properly all week’,” she said.

Eat, Shop, Save is just one of the shows the 41-year-old is associated with. Over the years, Singh has become a familiar face on television, having presented a wide gamut of programmes for channels including the BBC and ITV.

In 2005, Ranvir joined the BBC’s North West Tonight show as a journalist, but by 2011 was the co-host. She is best known for being a pre­senter on Daybreak (2012–2014) and Good Morning Britain (2014–present). She is also an anchor on ITV News and has presented