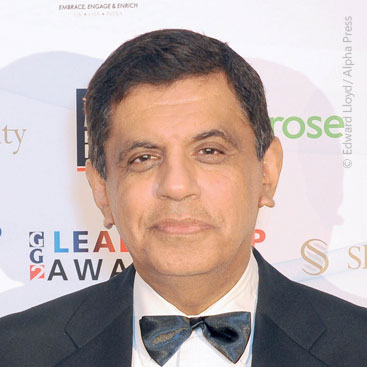 A CARDIOLOGIST of international repute, Professor Sir Nilesh Samani is one of the most influential figures in the worldwide battle against heart disease.

Among his achievements has been discover­ing some of the genetic causes of the condi­tion, which has led to pioneering treatments.

Knighted for services to medicine in 2015, he is professor of cardiology at the University of Leicester, consultant cardiologist at Leicester’s Glenfield Hospital and medical director of the British Heart Foundation (BHF), the biggest funder of cardiovascular research in the UK.

At the BHF, Samani oversees the strategic allocation of its budget towards fields of study aimed at combating heart disease. Speaking of the scale of the budget over which he presides, Samani says: “The BHF funds over £100 mil­lion worth of research a year, which is more than half of the total spend of cardiovascular research in the UK. So this is a big player, both in the UK and internationally.”

Along with his funding and commissioning research, Samani helps communicate the na­ture of new research findings to the public, ad­vocate new medical approaches and promote healthy lifestyle choices.

Renowned for his ability to explain complex scientific matters in layman’s language, in July he called for greater screening measures to identify the hundreds of thousands of people in the UK thought to be suffering from the life-threatening condition of irregular heart­beat, also known as atrial fibrillation (AF).

Explaining the implications of new BHF-funded research, he said: “The increased use of anticoagu­lants in patients with AF and the fall in the ex­pected number of strokes is a major suc­cess story, but much more needs to be done. There are still half a million people in the UK with ‘silent’ AF, who have no idea they’re at risk of having a stroke. Spotting AF can be surprisingly easy; of­ten all it takes is a simple pulse check. A normal heart beat will feel regular, but if you find yours is irregular or random, go and see your GP. It could save your life.”

Samani, who took up his BHF role in 2016, was born in Nanyuki, Kenya, where he says the town physician was always the person who “commanded the most respect”. Encouraged by his parents to choose medi­cine as a career, he was among the first under­graduates at Leicester Medical School in 1975 after the family moved to the UK. He gradu­ated with a first-class degree and has lived and worked in the town ever since, helping build Glenfield Hospital’s international reputation for research in cardiac and respiratory health.

Having achieved so much, Samani admits to at least one unfulfilled ambition: “Personally, I would like to be a doctor to Leicester City football club. I’ve been a fan for 40 years or more. I have offered my services.”