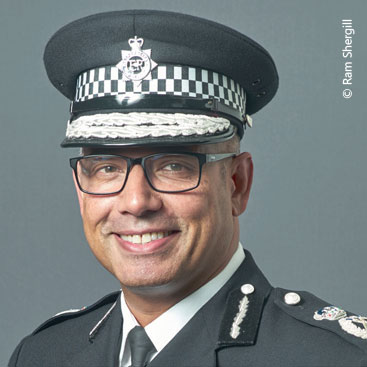 AS NUMBER three in the pecking order at Scotland Yard after the commissioner and the deputy commissioner, 50-year-old Neil Basu is now a familiar figure on television every time there is a terrorist attack.

Basu is the assistant commissioner for specialist operations in the Metropolitan Police Service and the national lead for counter-terrorism policing, a position he has held since March 2018. So his job basically is to keep the nation safe.

His office is in the New Scotland Yard building overlooking the Thames near Westminster Tube station.

The most senior Asian police officer in the land laughs when asked: “What’s a nice Bengali boy like you doing in a place like this?”

He is one of those characters who just loves being in the police force, which he joined in 1992 at the age of 24, after taking a degree in economics from Nottingham University. He worked initially for a bank and in sales management but his heart was set on joining the police – a seemingly unusual choice for a Bengali from a middle-class family until he explains there is a family link.

He talks with a great deal of emotion about his late father, Pankaj Kumar Basu, who passed away aged 76 three years ago.

“I am the son of an Indian immigrant,” he says. “My dad was a doctor born and raised in Calcutta [now Kolkata]. Went to school there, qualified as a doctor there, came to this country in 1961; married a white woman, my mother, a Welsh woman who is still alive. My parents were a mixed-race couple so holding hands in the streets of north Wales they would be stoned. Between them – doctor and nurse – they gave 90 years to the National Health Service, one of the UK’s greatest institution.”

“Back in 1963, when they got together, things were a bit different. I remember growing up in the 1960s and 70s in the Midlands where racism was commonplace every single day and it affected my father, it affected me, it affected my brothers. There was a very different atmosphere then.”

Some people might think trends in society had not been progressive in post-Brexit Britain, “but my God, if you were born and raised in a different era..,” he says, leaving the sentence unfinished.

Basu and his two brothers grew up in Stafford before he moved to London 30 years ago. One of his father’s jobs was as a police surgeon. “My dad did that for nearly 40 years.” Police surgeons, he says, “go to scenes of death to certify death, they go to police stations and deal with prisoners in custody. I grew up playing sport surrounded by police officers – my father had the greatest respect for the police service. But let’s be honest, he did think I was going to be a lawyer or a banker.”

His mother was also not keen on him joining the police. “She was worried.” And he admits the job has been dangerous: “I have had people threaten to stab me. I have had guns pointed at me – they turned out to be fake guns. But at the time it didn’t feel like it was a fake gun. I have chased and disarmed people who were armed with real guns.”

Basu chose not to train as a firearm officer. “Strangely enough, had policing been a fully armed profession in this country, I would never have become a police officer. And I have been head of armed policing in London and I have the utmost respect for what they do. Every armed police officer in the UK is a volunteer. That isn’t something you have to do – you volunteer to do it. And I am not sure I would ever want to carry a firearm or have to point it at somebody or, more importantly, have to pull the trigger even to save my life or somebody else’s.”

Although his father would have preferred him to have gone into a traditional profession, “he saw me up to the rank of deputy assistant commissioner – sadly, he did not see me get the QPM (the Queen’s Police Medal which is awarded for gallantry or distinguished service). My dad loved the fact I was a police officer and bragged about it from the day I was a constable to the day he died. He was incredibly proud of it.”

Would he recommend a career in the police to British Asians? “I think there are very few finer jobs than being a police officer. Do I recommend it? Yes, I do. And by the way, we are recruiting. I have been 26 years a Metropolitan Police officer and never looked back. I think it’s an extraordinary job.”

He quotes Mahatma Gandhi to explain his mission: “The best way to find yourself is to lose yourself in the service of others.”

He goes on: “Attracting Asian recruits who want to be police officers in a community where 40 per cent plus of the community is black and minority ethnic is incredibly important… It is important that when the public look at the police service it looks like them. We are just ordinary citizens in uniform.”

He grins as he adds: “Even in policing now there is only one other Basu in the (entire) Metropolitan Police which is a huge organisation. Basu was an unusual name – it wasn’t Singh, it wasn’t Patel, it wasn’t Mohammed, it wasn’t Ali. If you were speaking to me on the phone, you wouldn’t know who I was.”

He has risen through the ranks, solving 17 “category A” murders (“the most serious variety”) along the way. One was a double murder where the victim, he recalls, “was a little seven-year-old girl who was shot in the back and killed as a witness to her father’s murder when a drug dealer tried to rip off her father. It was a horrific case but it was solved because we went on Crimewatch (on BBC TV) and an informant came forward.”

Basu’s CV fills in his career progression: “In 2006, he transferred to Serious and Organised Crime as the lead for Turkish, Vietnamese and Chinese Organised Crime and performed theemer role of kidnap and extortion commander. From 2008-2009 he was staff officer to commissioner Sir Paul Stephenson, and in April 2009 was promoted to chief superintendent and borough commander of Barnet.

“In 2012 he graduated first in class from the Bramshill Strategic Command Course. Since then he has held a variety of chief officer roles including the commander for south-east London; commander armed policing…. and commander gangs and organised crime.

“In 2015 Neil was promoted to deputy assistant commissioner in specialist operations, beginning his counter-terrorism career as the London lead for protection and security…. Neil has been commended 10 times during his career for bravery, leadership and detective ability, including two Commissioner’s Commendations.”

Basu, who works very closely with Andrew Parker, the head of MI5, now finds himself in one of the toughest police jobs in the country: “I run London’s counter-terrorism and protective security.”

It is difficult enough anticipating moves by terrorists when they are part of large groups whose members sometimes make themselves vulnerable by having to communicate with each other. But he admits preventing an attack now has become “harder and harder” because all it takes is for someone to grab a kitchen knife or plough a vehicle into a crowd of innocent passers-by.

He reveals that “80 per cent of my resources and time and effort are spent trying to catch terrorists and that is what I describe as a sticking plaster or a kind of accident and emergency response. It is not a preventative cure to the problem.”

As for countering terrorism and incitement, often online by militant groups such as al-Qaeda or Daesh (Islamic State), he says: “The government’s strategy is under four pillars, called the four ‘P’s. Pursue terrorists – basically catch terrorists. Prevent people being drawn into terrorism – that’s the really important one in my view. Protect against terrorism – make sure you are actually deterring terrorism. That might be anything from the physical structures of your building to high visibility policing. And the last one, prepare the community for an act of terrorism so that they will be able to respond to it and recover better.”

He says the “big awakening” came after four home-grown suicide bombers killed 52 people and injured 700 in London on July 7, 2005. But what are the reasons British-born young men and women turn to terrorism?

“There are lots of them – every individual inspired to become a terrorist quite often will have a different path. There is no single escalating system, otherwise we could nip the causes in the bud. People born and raised here were inspired by events from abroad, inspired partly by foreign policy, by personal grievances. I have a lot of family in India. How would I feel if another country was suddenly bombing Calcutta and my family was being killed? I don’t know. I was born and raised here. I know I wouldn’t feel very good about it.

“We talk too much about it just being Islamist but, of course, Northern Ireland republican terrorism was effectively a religious war about territory and kicking the English out. And we have been dealing with that for many, many decades; which is what makes us experts in dealing with terrorism.

“You saw five attacks in 2017. We disrupt a lot of terrorist plots – 13 Islamist plots since Khalid Masood hit Westminster Bridge on March 22, 2017.

When a colleague gifted him a diary and asked him to write a line a day, his first entry was, “Bomb on the Jubilee Line.”

Among TV police dramas, he has enjoyed The Sweeney and The Bill. “I was a big fan of Inspector Morse. I really only wanted to be a detective. That was influenced not just by cop shows but (also) by my father’s stories about his career in policing and by the fact I wanted to solve crime.”

His favourite films – “as a movie buff I could talk all day on movies” – include The Colour Purple, Rocky, The Shawshank Redemption, and “without a doubt The Godfather” – “they are a terrible selection of films for a cop!”

He knows where the bodies are buried, literally and metaphorically, ever to be allowed to contravene the official secrets act by writing his memoirs. But he has got to the stage where he could legitimately introduce himself by saying: “The name’s Basu, Neil Basu.”

And if ever his colourful career inspired a movie, which actor would he like to play him? “Denzel Washington.”