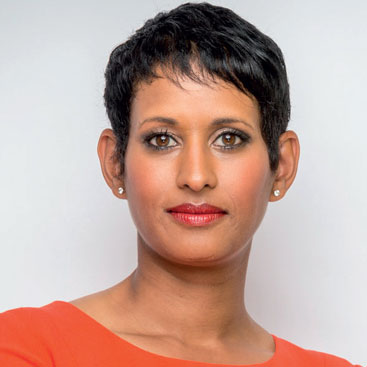 IT IS easy to labour under the false impression that we know everything about Naga Mun­chetty, for the TV presenter is in many of our homes daily presenting BBC Breakfast.

But there’s much more to her than her seri­ous on-air persona, and viewers got a glimpse of that when Munchetty decided to take part in Strictly Come Dancing in 2016.

However, agreeing to be on the show wasn’t an easy decision for Munchetty – her main worry was people wouldn’t take her seriously if they saw her in sequins. But she needn’t have worried – her four weeks on the show brought her thousands of fans who fell in love with her personality, and a good number of them were disappointed when she had to hang up her dancing shoes.

Munchetty, whose other talents include playing jazz trumpet and classical piano, is a name to reckon with in the world of broadcast media. After graduating from Leeds University, she worked on the Evening Standard before moving to television as a reporter for Reuters Financial Television. She went on to hold roles at CNBC Europe, Channel 4 News, and Bloomberg Television before becoming a mainstay at BBC Breakfast.

But journalism was not a part of Munchet­ty’s plans when she was young. She said her parents hoped she would become a lawyer or a doctor as it provided job security. When she expressed a desire to take up English literature at university, her mother wasn’t too pleased.

“My mum was like, ‘what are you going to do with that, become a poet?’ But today she’s my No 1 fan: she records the programme every time I present Breakfast, and she watches it, fast-forwarding through the bits that aren’t me. She gives me proper feedback. It’s really helpful,” she said.

Her parents come from different countries – her mother is from India and father from Mauritius – and this made their household dif­ferent from the other Asian ones in their neighbourhood. Growing up in Streatham, London, Munchetty also had to deal with her unusual name. Born Subha Nagalakshmi Munchetty-Chen­driah, her mother started calling her Naga (snake) from a young age because she had dreamed of snakes while pregnant. Mun­chetty hated the name so much that she had even considered changing it to Nadia.

While work keeps her busy, she al­so plays golf, a sport both she and her husband enjoy. Munchetty is an avid golfer with a handicap of 8, and has played in various tourna­ments. She also credits golf for giving her time with her husband James Haggar, a broadcast consult­ant at ITV.