Meera Syal and Sanjeev Bhaskar continue to break down barriers 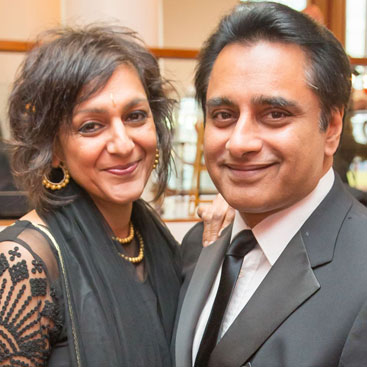 MEERA SYAL is something of a national treas­ure – her Eastern Eye Arts Culture and Thea­tre Award (ACTA) for best actress in the thea­tre category only bolsters this view.

Yet, it was a first of sorts again for the path­breaking actor and writer. Her varied career as a writer, actor and performer were recognised, authoritatively, in 2015 with a CBE for services to drama and literature.

She won the ACTA for her role in Annie the Musical. It was a West End smash hit and Syal did not play an Asian character. It was one of the big hit shows of last year and casting an Asian woman in a leading role in a big, all-singing, all-dancing musical meant something. How often does that happen?

Syal replaced Strictly Come Dancing judge Revel Horwood who, in turn, had taken on the role after comedian Miranda Hart had moved on when the show first hit London in April 2017. Syal played the character through Christ­mas and into the New Year, with the show fin­ishing its West End run in February 2018. It will be returning next year.

In Annie, she is Miss Hannigan, a bitter, mean, scheming orphanage boss. Syal reprised the role with great aplomb, and endeared her­self to a new generation of fans. The role struck a chord with her – Miss Hannigan is of a cer­tain age and finds the world doesn’t value her.

Syal said: “She’s a woman of a certain age who’s on her own and struggling, I was really attracted to that – the hurt and the pain.”

She said she has always wanted to do a mu­sical and the timing had worked. She loved the singing but confessed to needing more support for the dancing, but no one would be able to tell – it was a winning role in so many ways.

She also appeared in one of the most high profile drama series earlier this year – The Split was billed as a powerful female-centred show. Written by Abi Morgan (one of film and TV’s most successful writers who adapted Brick Lane for the big screen), it was given a prime-time slot and heavy publicity.

Syal played Goldie, whose husband falls for a young woman and decides to walk away after 30 years of marriage. The couple had built a multi-million pound business together and the drama essentially revolves around a family of lawyers embroiled in the divorce case.

She told the BBC: “I felt emotionally con­nected with it. We’ve all been through heart­break and that’s something we have in common as human beings, but I really want to tell this story for all women who’ve been through this.”

It’s hard to think of a world without Syal’s seminal Anita and Me – her debut novel that was published in 1996 and turned into a film in 2002. It got a screening on the BBC in its Big British Asian Summer season. The book is on the GCSE syllabus and the film was preceeded by a five-minute documentary in which Syal visits her old haunts in Essington, a mining vil­lage just under 20 miles north-west of Bir­mingham, and where she grew up.

Her novel is heavily autobiographical – charting the racism, struggles and dreams of folks who moved to an area where there were few brown faces. Today, Syal has come full cir­cle – her parents who emigrated from India in 1960, live with her and her husband, Sanjeev Bhaskar. She has a grown-up daughter – an up-and-coming theatre director, with her first husband, Fleet Street journalist Shekhar Bha­tia – and there is also a son of 12 with Bhaskar.

She told an interviewer at the time of the TV screening of Anita and Me that there were benefits of multi-generational living – there was no need for babysitters and the children could learn from the grandparents first hand.

Syal studied English and drama at Manches­ter University, getting a first, and broke into acting with a one-woman show at the Edin­burgh Fringe. She established herself as a ver­satile actor after the hit and culturally pivotal Goodness Gracious Me (GGM) finished its run in 2001; and the spin-off The Kumars at No 42, which ended in 2006 and was revived by Sky in 2014.

It was while working on GGM that Syal met Bhaskar, and they got married in 2005.

His career had a different trajectory to Syal’s – he has a degree in marketing from the University of Hertfordshire and like any good Asian boy with such a degree, secured a job with computer giants IBM.

But it wasn’t his forte and along with col­lege friend Nitin Sawnhey, he became one part of a comic double act, the Secret Asians. One of their early performances were seen by Anil Gupta who was one of the forces to help get GGM onto the BBC.

Bhaskar is best known these days for his starring role in one of Britain’s most popular prime-time dramas Unforgotten. It notched up six million viewers when it was screened over the summer and was duly recorded as one of ITV’s hits in 2018. Bhaskar plays Detective In­spector Sunny Khan and along with Detective Chief Inspector Cassie Stuart (Nicola Walker), their remit is to investigate cold cases.

Each of the six weekly episodes deals with a single murder case. The production generates a lot of comment on social media and viewers pick over who may be the ultimate culprit and it is only revealed in the final episode. Syal ex­pressed extreme frustration on Twitter that he had kept her in suspense right until the final episode when all was revealed about who was responsible for the murder of ‘Haley Reid’.

Bhaskar’s other prominent TV series was the Indian Doctor, a charming drama about a 1960s Indian medic settling in Wales. The last of three seasons of the series ended in 2013.

He often stands in for Simon Mayo on the Kermode and Mayo Film Review, broadcast on Five Live. Robbie Collin sits in for Mark Ker­mode. Bhaskar interviewed Hollywood icon Denzel Washington in August and is a well-known film buff who knows his Bollywood too. He appeared in a cameo role in Jhoom Barabar Jhoom, a Yash Raj film in 2006.

Bhaskar has also been the University of Sus­sex’s vice-chancellor since 2009.

Both Syal and Bhaskar are set to appear in an as-yet unnamed (at the time of going to press) film by Danny Boyle, the Oscar-winning director of Slumdog Millionaire.