‘Hope and faith will help Britain meet the challenges ahead’ 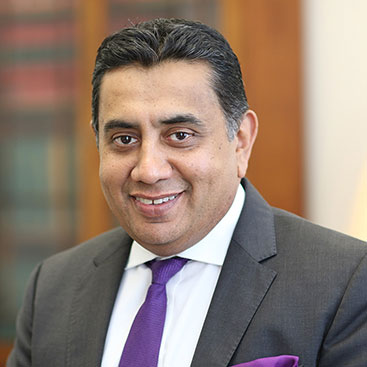 LORD TARIQ AHMAD has more jobs than most people. In January 2011 he was a banker and a Wimbledon councillor serving on the Merton Council cabinet. Then arrived a some­what unexpected elevation to the House of Lords on the recommendation of prime minis­ter David Cameron – although a certain Theresa May might have put in a good word for him.

The following year he joined the royal household as Lord-in-Waiting to the Queen and by 2014, Lord Ahmad of Wimbledon was also a parliamentary undersecretary of state in the ministry of housing, communities and local government in the Cameron-Clegg coalition.

There, following Cameron’s decisive 2015 election victory, he was promoted to two gov­ernment departments at the same time – as minister for skills and aviation security at the Department for Transport, and as minister for countering extremism at the Home Office, where Theresa May was secretary of state.

Lord Ahmad is a Pakistani-origin, Ahmadiyya Muslim and his Home Office job would call on knowledge and experience May knew he pos­sessed. She had plans for this engaging and friendly man, and wanted to keep him close by.

In fact May and Ahmad both hailed from Wimbledon, both had worked in finance, and had both served on Merton Council – she until 1994 (May became an MP in 1997), and Ahmad from 2002. For two years he was vice-chair­man of the Conservative party, while May’s banker husband Philip had been for a time chair of Wimbledon Conservatives.

Lord Ahmad had started as a councillor with Stephen Hammond – who would become an MP and a Department of Transport minis­ter. At that same time, Merton councillor Chris Grayling left to take up a seat in parliament.

This so-called Wimbledon set of Conservative colleagues and friends usurped the pub­lic-school ‘Notting Hill set’ personified by George Osborne in a reshuffle in July 2016, days after May entered No 10. “The posh boys have gone. It’s over,” Tory MP Nadine Dorries tweeted at the time.

Lord Ahmad was appointed minister of state for the Commonwealth and United Nations at the Foreign and Commonwealth Office (FCO) a few days after the general election, on June 13, 2017. At the same time, he was made the prime minister’s special representative on Pre­venting Sexual Violence in Conflict. In addition to that, he was the FCO minister with special responsibility for the Caribbean.

Such was his overflowing inbox when the GG2 Power List spoke to Lord Ahmad last year. Since then, he has added another job to his portfolio, having been appointed by May in July as her special envoy on freedom of religion or belief, promoting global inter-faith respect and dialogue, with a focus on persecuted minorities.

It’s hard to know whether to envy Lord Ahmad for having May’s trust or to sympathise with its consequences, so busy has he been over the past 12 months. Tracking his recent movements by tweet, it appears he has zig-zagged from Is­rael to Algeria, then Tunisia, Libya, Bahrain, the Hague and Kosovo. He met Pope Francis in the Vatican; the Caribbean is upcoming.

“In the end, ‘busy’ is probably true, but I was honoured to take on this responsibility,” says Lord Ahmad of his latest assignment. “It reflects the priority the prime minister is attaching to the freedom of religion or belief. We have been motoring on this agenda over the past 12 months within my broader responsibil­ity as human rights minister.”

It is reassuring that the plight of groups such as the Rohingya, the Yazidis, Orthodox Chris­tians across Africa and the Mid­dle East, as well as persecuted Muslim minorities, is being kept in the international spotlight.

“We are seeing some traction recently in Libya and Algeria, where there have been a se­ries of closures of churches,” he reveals, and explains his advocacy regarding the Rohingya of Myanmar: “I’m minister for the United Na­tions as well, and there’s been some real suc­cess over the last 12 months where we’ve got to the position, from having closed discussions about it with the Security Council, to agreeing, because of the strength of our diplomatic in­fluence and development work, that the UN agencies can have access.”

Lord Ahmad has “skin in the game” where persecution is concerned: Ahmadiyyas suffer discrimination and legal brutality in Pakistan.

“I think it’s a sad reflection of modern-day Pakistan, when they see what the vision of the founder of Pakistan, Muhammad Ali Jinnah, was – for an all-inclusive country which was based on the principles of Islam, which were accommodating all denominations,” Lord Ah­mad says with deliberation.

“Being an Ahmadiyya Muslim also provides me the strength and conviction to stand up for any persecuted minority wherever they may be in the world,” he declares.

It looks as if May has picked the right man for the job, and that extends to his role as Commonwealth minister during April’s Heads of Government meeting in London. “We re-af­firmed our commitment to the pledge of 12 years of girls’ education,” he emphasises. “I think that’s important, to insist that we edu­cate girls to ensure their empowerment, wher­ever they are in the world.”

And with Brexit in the background, he stresses it was also vital to renew and reaffirm Commonwealth ties: “The family of the Com­monwealth is unique,” he says, “and I’ve seen that over the past 12 months as the minister responsible – how we are bound together by common systems in business, legal systems, education systems, language, culture, history. And therein lies the strength; and the diversity of its network provides a unique perspective on how we can do more internationally.”

The work is hard and never-ending, but things are always getting better. “I’m an eternal optimist,” he says. “Challenges are to be met, but hope, optimism and faith are things that should be unstinting and we need to apply them.”

There is just one more job: Lord Ahmad is a father of three. Can there possibly be any time left over for family these days? “I’ve always said that my priority is my family,” he replies. “I think it’s how you manage your time, and I always will prioritise my family, which is my heartbeat and is what defines me.”