Lord Bhattacharyya is taking manufacturing into the digital era 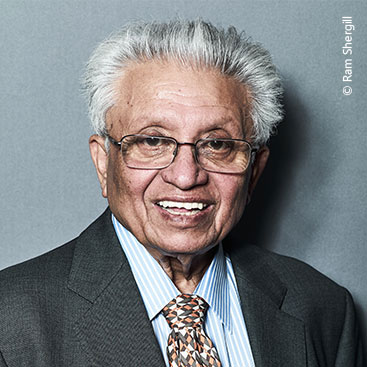 PROFESSOR Lord Kumar Bhattacharyya is to­day probably the most eminent professor of manufacturing in the country.

At Warwick University, where he is based, Lord Bhattacharyya has set up a science city called the Warwick Manufacturing Group (WGM), with eight buildings already up and another four in the process of being built.

“We are now the largest manufacturing re­search centre in the world,” he says. “Nowhere in the world, including Harvard and MIT, will you find a place like WGM.”

Cutting-edge research is taking place here on everything from electrical car batteries to composites that are lightweight but as strong as steel and also into how artificial intelligence can be used by consultants to get the maximum information from a patient’s medical scans. “Everybody says our battery technology is 80 per cent better than the best in the world,” Lord Bhattacharyya says.

In summer this year, the government added £140 million to WGM’s budget for vital re­search into electrical “batteries of the future” for cars, buses and trains. It will not happen overnight but “by 2030 to 2040 almost everything will be electric”, he predicts.

For his Institute of Digital Healthcare, he has recruited “clinicians, healthcare admin­istrators, scientists, engineers and business people”, including Dame Julie Moore, the recently retired chief executive of Queen Elizabeth Hospital in Birmingham, “the best hospital in the country”. “The main research is diagnostics,” which means using artificial intelligence to obtain the maximum amount of critical data from, say, brain or heart scans. He also works with GCHQ to make digital systems more secure.

Lord Bhattacharyya gives credit to a far-sighted Margaret Thatcher for getting him to set up WGM in 1980 as the meeting point be­tween academia and industry. Since then, he has had the confidence of every prime minister, including Theresa May who came to see him three days before the referendum and then shortly after she moved into Downing Street.

With 1,000 people, mostly top engineers, now employed at WGM and 3,000 students in residence, he sums up his mission: “My job ba­sically is to look at the future and the direc­tions where technology is taking us and then make sure that we exploit it in design and manufacture and health.”

At WGM, he is taking on 1,000 apprentices who will be housed in a new building called the Degree Apprentice Centre. The appren­tices, who are the key to solving the skills shortage in British industry, will do their aca­demic work at WGM but be farmed out to a wide range of companies such as Rolls-Royce and Network Rail for practical training.

Nor is Lord Bhattacharyya’s influence con­fined to the UK, although WGM is credited with having created an estimated 400,000 jobs over the years. “We work with about 1,000 global companies,” he points out. The roll call is impressive – Airbus (where WGM did the “flexible tooling” for the A380 and A350), Alstom, Astra-Zeneca, Bosch, BAE Systems, GE, Huawei, Nissan, TAFE, Tata, Turkish Airlines, TVS, Vodafone, EBS and Bosch. There is an especially close relationship with Jaguar Land Rover, whose former boss, Ratan Tata, is one of Lord Bhattacharyya’s closest friends.

The Chinese embassy in London has gifted Lord Bhattacharyya a 10-year-visa because he has visited the country so frequently since his first trip in 1984. On September 29 last year in the Great Hall in Beijing, he was honoured with China’s two top awards on the same day – the “Great Wall Friendship Award” and the “Chinese Government Friendship Award”. They were given for his “contribution to the economic and social development of China as well as progress of human civilisation”.

He says it is important to understand that the world of manufacturing is moving away from “metal bashing” to one where everything is digital. He himself served a six-year apprenticeship with Lucas Industries in Birmingham when he first arrived from India as a 20-year-old.

He was born in Dacca (now Dhaka) on June 6, 1940, and went to school in Bangalore. His father, a professor of physical chemistry, joined the staff of the first Indian Institute of Technology to be set up in Kharagpur in West Bengal. After taking his first degree in technol­ogy from IIT Kharagpur, the young Sushanta Kumar Bhattacharyya arrived in Britain in 1960. He did an MSc in engineering produc­tion and management followed by a PhD in en­gineering production in 1970. After an aca­demic career at Warwick University, he was knighted in 2003 and given a peerage in 2004.

He is very proud of his links with IIT Kharagpur which has conferred an honorary degree on him. The institution has produced some outstanding alumni, among them the current head of Google, Sundar Pichai, he adds. WGM has a collaboration agreement under which its expertise in electrical batteries and digital healthcare technology is shared with IIT Kharagpur and students from there come to Warwick to do their PhDs. “Indian students are wonderful – very, very good,” he enthuses.

Today, Lord Bhattacharyya is the “Regius professor of manufacturing” – a notable hon­our since there have been only 22 granted by the reigning monarch since the time of Queen Victoria. It is given for excellence in science, usually in mathematics and the fundamental sciences. Lord Bhattacharyya’s was the first for engineering and manufacturing, for which he was also elected to the Royal Society in 2014.

It is a long time since Thatcher, on one of her early visits to WGM, showed remarkable perspicacity in describing Lord Bhattacharyya as the country’s “greatest academic entrepre­neur” and “a true pioneer”.

As a young apprentice, Lord Bhattacharyya had a gift for buying old cars, stripping down the “bangers” and selling the “souped up” ve­hicles for a small profit. Although he longer gets grease on his hands, not least because the world of engineering has gone digital, he re­tains an instinctive understanding for how things work and, more importantly, how they can be improved. Giving the GG2 Power List a tour of WGM, he laughs: “Once an engineer, always an engineer.”