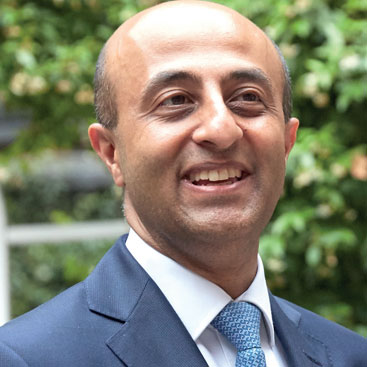 PERSONABLE and amiable, Lord Jitesh Ga­dhia represents a wing of the Conservative party that was once at the centre of gravity in government and appeared unassailable.

However, Brexit changed all that, but Lord Gadhia told the GG2 Power List that it is by no means all doom and gloom.

He was a merchant banker and a very suc­cessful one. He began his working life at Bar­ings – at one time this was the Queen’s bank and was first established in 1762. From Barings, the young Gadhia went to ABN Amro, and then Barclays and finally Blackstone, a US private equity house.

His career in finance hasn’t exactly stopped – he is a board member of UK Government In­vestments, a government organisation that manages the country’s assets. It was this body that secured both Lloyds and RBS during the banking crisis of 2008 and has now been sell­ing its stake in them. In short, Lord Gadhia and other members are charged with making sure taxpayer’s interests are protected.

In the private sector, Lord Gadhia is a direc­tor of BGL Holdings and chairman of its sub­sidiary, comparethemarket.com and is also a director of Third Energy Onshore Ltd, and Ac­cord Healthcare, according to the House of Lords’ Register of Interests. He also advises Intas Pharmaceuticals, Accord’s Indian parent.

He told the GG2 Power List that he divides his time roughly equally between his commit­ments in the House of Lords and his private-sector responsibilities.

In some ways, he is at the forefront of Con­servative politics because of his connections. He is a friend of David Cameron, the former prime minister, and would very much be seen as in the liberal, metropolitan ‘remain­er’ wing of the party, which still has some big political beasts in its corner – despite the Brexiteers’ seeming domi­nance of government