Lakshmi and Aditya set a bold vision for future growth 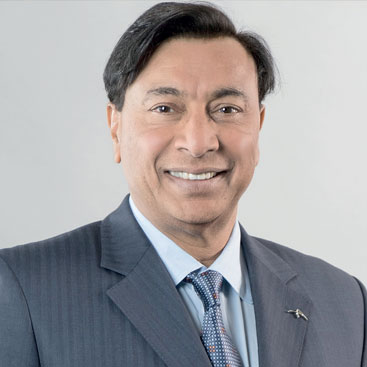 LAKSHMI MITTAL was once Britain’s richest man and almost everybody knew it.

Mittal bought a palatial home in one of Lon­don’s most sought-after areas for son Aditya. Purchasing the house in Palace Green, Kens­ington for £117 million in 2008, he later report­edly sold it off for £7m less in 2013.

The steel tycoon also spent millions on the marriage of his daughter, Vanisha, to Amit Bhatia (see No 67). It is believed to be the second most expensive wedding in recent times and cost £60m when the pair wed in Paris in 2004.

Mittal himself continues to live in a street dubbed ‘Billionaires’ Row’ in Kensington Pal­ace Gardens – paying £57m for a house there in June 2004. Known as one of the most exclu­sive residential addresses anywhere in the world, most of the houses on this road are ei­ther embassies or house top diplomats.

The bald business facts, as stated on the Ar­celorMittal website, offer some dimension of this tycoon’s reach and influence. The com­pany employs nearly 200,000 people across 60 countries, describing itself as “the world’s leading steel and mining company.

“With an industrial presence in 18 countries, we are the leader in all major global steel mar­kets, including automotive, construction and household appliances and packaging.”

Mittal has been looking to expand into India in a big way and was, at the time of going to press, still in the process of attempting to ac­quire Essar Steel, one of India’s largest indus­trial concerns.

In late September, the Indian supreme court reserved judgement on an ongoing dispute about the eligibility of two bids. Much of the process around this process of insolvency is new, and both Mittal and rival bidders Numetal are testing the law and each other’s resolve.

The family-owned Essar Steel Ltd effectively collapsed last year, with debts amounting to approximately £5.3 billion. The fall-out is being managed through insolvency provisions and is now the subject of legal proceedings in India. India’s regulatory bank, the Reserve Bank of India (RBI), has sought to take action over the last year as Indian corporate debt amounts to more than £150bn.

Ironically, the sector has been enjoying something of a revival and explains why the battle for control of the company has become bitter and embroiled in legal challenges and appeals. Most of Essar’s creditors are Indian banks (where the state has significant and ma­jority stake-holdings); India’s biggest bank, State Bank of India, is thought to be the single most affected Essar lender.

In mid-September, a deal looked imminent, but then a National Company Law Appellate Tribunal said that Mittal had to pay up on commitments of £745m in relation to two companies, Uttam Galva and KSS Petron, in which he had significant interests, for any sale to go ahead. ArcelorMittal told the supreme court it would abide by these commitments, provided its bid for Essar was accepted.

Formally, three companies are bidding for Essar and offer creditors some, if not all, their dues back. ArcelorMittal originally tabled a £4.46bn bid for Essar Steel; Numetal bid £3.93bn; and Vedanta (run by Indian-born ty­coon, Anil Agarwal) also pledged between £3.19bn-£3.72bn.

Initially, Mittal’s lawyers objected to the Numetal (backed by Russia’s VTB Group) bid, pointing out that 25 per cent of the company belonged to Rewant Ruia, the son of Essar Steel founder Ravi Ruia. This enabled the fam­ily, in a slightly roundabout way, to take back control of the company that had foundered under their stewardship.

India’s Insolvency and Bankruptcy Code (IBC) doesn’t permit the involvement of per­sons in bidding who are connected to busi­nesses which have defaulted on debt.

Another Indian company in the sector, JSW Steel, bought out this disputatious share be­fore second round of bidding for Essar Steel.

Mittal had to fight back when Numetal law­yers argued that ArcelorMittal’s bid was ineli­gible and tainted by two of his brothers – Pramod and Vinod – owing money in busi­nesses they ran.

“There is absolutely no connection between ArcelorMittal eligibility and the businesses of Mittal’s brothers,” the Press Trust of India (PTI) reported an ArcelorMittal spokesman saying. “It is a trivial attempt to distract from the central fact that ArcelorMittal has the most compelling offer on the table for all stakeholders, particularly financial creditors.”

In the same month, Mittal could breathe a sigh of relief with another take-over wrangle finally resolved – as a £1.5bn deal to purchase Italian steelmaker, Ilva, was finally approved. Most of the dispute centred around job cuts and a rival purchase plan from Indian steel gi­ants, JSW.

In the end, an agreement was struck with the trade unions and got the nod of approval too from the Italian government and the Euro­pean Commission. The deal with the unions means that company has pledged to consider every cur­rent employee when it comes to job cuts. Arce­lorMittal agreed it “will initially hire 10,700 workers based on their existing contractual terms of employment” as stated on its website. In addition, between 2023-25, it would be committed to hiring “any workers who remain under Ilva’s extraordinary administration” – which is believed to be those working in the nationalised section as currently constituted.

The company, which produces more steel than any other plant in Europe, is based in Ta­ranto in southern Italy and the government was keen to preserve as many jobs in a gener­ally depressed region of the country. However, in recent times, Ilva has fallen foul of modern environmental practices, and was deemed in­efficient and overstaffed.

ArcelorMittal has committed investments of around £900m to a clean-up and more than £1bn in efficiency measures. One influential sector publication welcomed the successful takeover, saying that a new buyer with deep pockets was always re­quired and that not only did ArcelorMittal have them, it offered a real plan with a real future.

Mittal’s son Aditya, who is ArcelorMittal group president and CEO of ArcelorMittal Europe, hailed the deal and con­gratulated Italian industry minister Luigi Di Maio in aiding it. He added that the new concern “would make an important contribution to the communities in which it operates and once again be recog­nised as a competitive and leading player in European steel industry.” ArcelorMittal is expected to take formal control of Ilva from November 1 this year.

Earlier in 2018, Aditya was elevated to Arce­lorMittal group president, in addition to his roles as group chief financial officer and CEO Europe. It is a sure sign that Mittal senior will one day hand over the company lock, stock and barrel to his Wharton Business School-ed­ucated son.

Now 42, Aditya was born in India but grew up in Indonesia before leaving for university in the US. He worked for Credit Suisse First Bos­ton not long after graduating and joined his fa­ther’s company in 1997. Aditya was president and CFO for Mittal Steel Company between 2004 and 2006, and many believe he was cru­cial to the company’s acquisition of French steelmaker Arcelor in 2006.

Much is made of Mittal’s ability to cut a deal and reassure nervous politicians that jobs can be saved in any takeover; Aditya is the number cruncher who makes sure his father has the figures to match the positive rhetoric.

In 2016, the company launched a five-year 2020 strategic plan. The year represented something of a step change for ArcelorMittal – it raised $3bn (£2.3bn) capital and with a sale of assets and other measures, it brought overall debt in the company down to just over $11bn (£8.45bn), the lowest it had been historically.

The steel market continues to grow and the Mittals know they have to increase their footprint if they are to stay at the top as the world’s No 1 steelmaker.

Adiyta told PTI this summer: “I work very closely with the chair­man and CEO (Mittal) on de­veloping the fu­ture strategic direction of the group. Our global foot­print is impor­tant to us but we don’t ex­pand for the sake of expan­sion. We look for strategic opportunities which add value to our current busi­ness model and provide exposure to future growth dynamics.”

As well as India, where the Mittals have rel­atively low-key investments (prior to Essar), Aditya told PTI it would expand in Italy, which it has done now with the takeover of Ilva; and Mexico, where increased home demand was driving growth and investment in expansion.

He was adamant – this was not simply about geography but about an unfurling business vi­sion. “Our focus is not just on geography it is also on product and process. Over the past five to 10 years, we have seen higher value steels representing a growing part of our revenues. We have a real competitive advantage with our steels for the automotive sector and other dis­cerning customers, and we are looking to grow further here and expand our market share.”

The company continues to invest in re­search and development. Its global R&D sec­tion has some 1,400 full-time researchers and spent £210m in 2017.

Aditya’s wife Megha sometimes hit the headlines in the UK tabloids. She runs luxury fashion label, Escada, taking it over in 2009 in the rescue of a famous name that had lost its way. Founded in Munich and still headquar­tered there, it operates in 80 countries and has around 1,500 employees.

In May, Megha hosted the annual British Fashion Coun­cil event and was joined by fashionistas Tania Fares and Sian Westerman. A British newspaper re­ported that “the cream of the fashion world” attended the party at the Mittal’s “palatial home” in London.

Describing it as an “achingly stylish evening”, it commended Megha on the choice of a sweeping floral maxi dress, saying it was stun­ning. And the statement earrings and over­sized cardigan helped create an impression.

In the autumn, the company celebrated its 40th anniversary and hosted its first runway show in New York.

New creative director Niall Sloan is looking to make her mark and did so with Hollywood star Kate Bosworth and US celebrity Nikki Reed among the guests at the New York event.

Aditya and Megha had their third child ear­lier this year, reportedly through a surrogate.

The Mittals continue to have a close rela­tionship with Great Ormond Street Hospital (GOSH). The Mittal Children’s Medical Centre opened in January 2018 with the Duchess of Cambridge doing the honours. There are 240 beds spanning across two wings and the ex­pansion has enabled the building of new facili­ties for parents to facilitate overnight stays with sick children.

Aditya and Megha, who have been the driv­ing force behind the original £15m GOSH do­nation, welcomed the improvements. In 2008, they donated £15m to the hospital which can trace its roots back to a single ward and 10 beds in 1852.

“We’ve followed the progress of the Mittal Children’s Medical Centre closely as it’s taken shape and it has been wonderful to see it come to life,” Aditya said. “It has been an amazing journey for us and we’re so proud to have been a part of it. My family and I are confident that the patients and families who come here in the future will receive the best possible care, in the best possible space. And there can be no greater reward than that.”