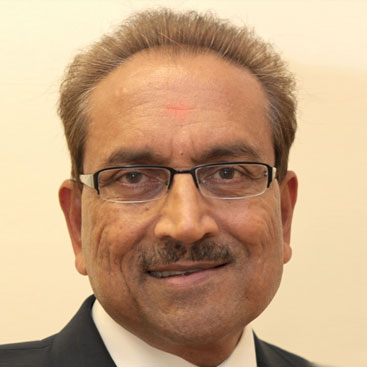 UNTIL recently, Jitu Patel was the chair of trustees at London’s Bochasanwasi Shri Akshar Purushottam Swaminarayan Sanstha (BAPS) Mandir in Neasden (popularly known as the Neasden temple), the largest Hindu temple outside India when it was built in 1995, and al­so Europe’s first traditional stone mandir.

As the focal point of the UK’s Hindu com­munity, BAPS Neasden typically receives over 50,000 visitors a day during Diwali celebrations.

Patel was born in Kenya and later moved with his family to spend his teenage years in Zambia, before arriving in London in 1978, where he still lives with his wife Rohini. “She has been a pillar of strength for me,” says Patel – the couple have three children and three grandchildren.

His life and career have been based around business and religion – he qualified as a certi­fied accountant with Coopers & Lybrand (now PwC) and was always a devout Hindu who took his sevak [service] role very seriously. His decades of service for BAPS, and as a leading light in the Hindu community, made it inevita­ble that Patel would rub shoulders with the country’s major politicians, and most of the in­fluential figures in the British-Asian world.

In 2006, then-prime minister Tony Blair and his wife Cherie were received at the mandir by Patel as part of an organised visit. He also wel­comed prime minister David Cameron and wife Samantha to the temple some seven years later as part of the Hindu New Year celebrations.