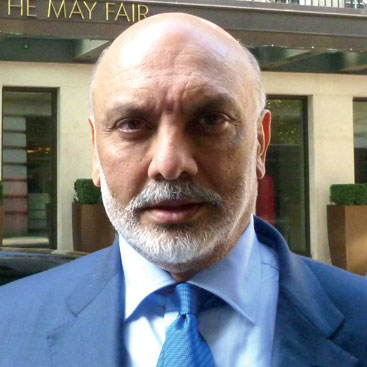 THERE can be little doubt that Jasminder Singh is one of the leading lights of the hotel industry, and his phenomenal success contin­ues to inspire awe and admiration.

The group is still privately owned, and Singh’s wealth is estimated to be £1.5 billion – as cal­culated by Eastern Eye’s Asian Rich List which profiles the country’s 101 richest Asians.

A certified accountant whose parents left India for East Africa, Singh arrived in Britain in 1968 as a 17-year-old. He started with a sin­gle hotel in 1995 and the company he created was established in 1977. Some 20 years later, he would be awarded an OBE in recognition of his services to the hospitality industry.

Singh now has 12 hotels within his Edward­ian Hotels Group – most are in London and one in Manchester. Perhaps the most iconic of these – The Londoner – is still under construction. Set to open in 2020, it will be at the heart of the capi­tal’s entertainment scene, located as it is in Leicester Square. The 350-bedroom hotel will have nine sto­ries in all – six below ground – and will house two-screen Odeon cinemas and five concept restaurants and lounges, along with a destination roof-top restaurant and bar.

Expect to see a few glittering film premieres at The Londoner when it opens, as unlike the other venue in Leicester Square, the hotel can literally accommo­date stars attending the event in the same building. The name was revealed only a few months ago (in the sec­ond half of 2018) and Singh told the GG2 Power List that it epitomised a lot of things to him.

“It is dedi­cated to the ex­citing, forward-looking city that is so important to us as a hos­pitality group. This complex and progres­sive project demonstrates our commit­ments to the capital and our ability to deliver high-quality, sustainable and in­tegrated hotels designed for the future,” Singh said.

It is very much a statement hotel and whatever Brexit may say to the rest of the world, Singh is among some of the capital’s staunchest supporters. This will be an establishment that says Britain is still a significant player and nothing – not even Brexit in any of its guises – will prevent busi­nesses from con­tinuing to extol the capital’s vir­tues and its progressive and outward-facing nature, he noted.

Building a new land­mark prop­erty in Leicester Square is about as high profile as you can get as a hotelier, and Singh knows it. “We wanted to create an impressive meeting space and I believe we will achieve this with our conference room for up to 1,000 guests,” explained Singh about the facilities that will be on offer at his newest establishment.

“We are already handling early inquiries from large corporates who are attracted by the scale and prestige of the facilities,” he said. The spa and wellbeing centre, said Singh, will be located below ground.

“It has long been a vision of mine to create a lifestyle hotel destination in a prime central London location and I am proud to watch this property take shape,” Singh told the GG2 Power List. “We are supported and aligned with a number of international, best-in-class partners to deliver the work, including engineers Arup, project developers McGee, interior design team Yabu Pushelberg and project architects Woods Bagot.”

For Singh, the customer experience remains central to the Edwardian Hotel Group’s suc­cess and he outlined five areas where he and his colleagues are focused on delivery. He said: “Over the last 18 months, we have continued to invest in five core business areas – our product, connectivity, people, education programmes and partnerships.” The Londoner is part of the future product proposition, but he told the GG2 Power List that the group “remains committed to a pro­gramme of refurbishment across the portfolio”.

A multi-million-pound “enhancement” is also under way at the Radisson Blu Edwardian Manchester. Singh took it over in 2004, and was determined to restore the building’s illustrious reputation. Created to commemorate the repeal of the Corn Laws, the building was opened as The Free Trade Hall in 1853. It represents the triumph of free trade and heralded a new age of enterprise and endeavour, especially in the north. Singh has retained the original façade of the public hall which was owned by the Manchester Corporation, and has paid special attention to its her­itage interior and fittings. It was a political arena, a concert hall and rock venue before he converted it into a hotel.

He has just launched Peter Street Kitchen there, and diners can now enjoy Japanese and Mexican specialities at the refurbished eatery inside the hotel. The ground floor lobby and spa and fitness centre have been improved and there is a new Birch Room and reception area.

Singh told the GG2 Power List: “We have a passionate and experienced design team who have creatively reflected the city’s modern en­ergy and the building’s classic, unique heritage throughout their work. “For more than 40 years, we have updated the products we offer to guests, developing a reputation of surprising and delighting them.

“We react to new trends, but also remain confident that the essence of Edwardian Hotels London is upheld. It is important that visitors trust in the quality of the experience we pro­vide, and we want to responsibly re-invest into the cities that we call home.”

Singh admitted that more than anything, it was technology that had most transformed his business. “I am awed by the scale of techno­logical progress and how that has impacted every industry in the world. “The hospitality sector today is virtually un­recognisable from when I began this business. Today’s guests expect to be connected at all times and they want a seamless experience that they can trust.”

The group’s own app and chatbot ‘Edward’ has proved popular – it responds to queries at any time of the day or night and in many languages other than English, and all Edwardian es­tablishments have high-speed Wi-fi to keep guests connected.

The sense of putting a single customer at the heart of the Edwardian philosophy extends to “people and education”, as Singh put it. In February 2016, the group became the first hospitality entity to collaborate with Imperial College Business School, pledging a 10-year al­liance to create a development programme to train over 250 of its executives.

He described the relationship as “deep” – the first cycle of the partnership and the bespoke three-year programme has just been completed. “At Edwardian Hotels London we are nurtur­ing the leaders of today and tomorrow. In con­junction with professors at Imperial College, the next cycle will be tailored to address the future needs of the business,” Singh explained.

While his family are involved in different aspects of the business, the heir apparent is Singh’s son, Inderneel. Formerly managing director of The May Fair Hotel, he is now director of central opera­tions, giving him both a stronger feel for the wider business and a chance to bolster perfor­mances. Botho Stein has taken over as general manager at The May Fair Hotel.

Daughters Siraj and Krishma also hold im­portant positions. Siraj manages the brand and controls the marketing, as well as has a role in the management of the portfolio of restaurants attached to the hotels.

Krishma, who has a design background, has been pivotal in the refurbishment of the Man­chester hotel, and is a key member of the in­fluential product design team. “She creates and defines spaces throughout our properties to ensure that our guests feel impressed by, yet comfortable in, and connected to their sur­roundings,” explained Singh.

The Edwardian group enjoys a wide range of partnerships – its flagship The May Fair Hotel is home both to London Fashion Week and the London Film Festival. Singh values these relationships and they offer another way of tapping into the mood of London itself as a global city, he says. “As a dynamic hospitality group, we greatly value our deep-rooted partnership network, because we know that they not only reinvigor­ate our business, but also enrich our connec­tion to our cities.

“As a London-based business, we have a re­sponsibility to align with a range of organisa­tions, charities and individuals because that reflects the rich fabric of the city itself and all that is on offer to locals and visitors alike.”

He told the GG2 Power List that he believed arts and culture “fuel the lifeblood of a city”. “I am convinced that no other city has a bet­ter cultural engine than London.”

The group works with smaller organisations too – it has partnerships with Off West End (a website devoted to independent theatre) and Deafinitely (a deaf theatre company). There is also a raft of charity support and associations. “We have always believed that supporting charities through the giving of time, funds and other resources is of immense value and can contribute positive, long-lasting impact on communities,” he said.

Cancer Research is the group’s official cor­porate charity, and all the funds raised by the wider company go to Cancer Research UK. Each hotel also has local charity partnerships that are relevant to them. Among these are Centrepoint, Glass Door, and the children’s ward at University College London Hospitals. “We feel these relationships connect our properties to their location and help to fully immerse each hotel within its neighbourhood.” Staff can also nominate a charity and access charity funds managed by a committee.

Perhaps the perennial question for anyone beyond the official retirement age and still en­during the day-to-day travails of business is, when will they give themselves the time to put their feet up and reap the benefits of all their efforts? It elicits a telling riposte: “Every year someone asks me if now is the time I will choose to retire, but I have no plans yet.

“The industry continues to motivate me. Every day there is something new and I am still hungry to learn more and grow the group. “The team around me is also truly inspiring. They present fresh ideas that challenge and energise the way we behave. “I will always want to have a role in this business, because I don’t want to miss out on that genuine determination to succeed.”