Jamil credits her success to being open to new opportunities 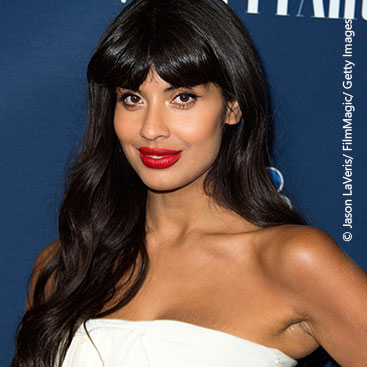 SHE IS one of the UK’s hottest talent exports. Now living in Los Angeles, with a seven-year contract to star alongside Ted Danson in The Good Place for NBC and Netflix – a comedy-series cross between The Prisoner and Ground­hog Day, set in a fake heaven run by heavily disguised demons – Jamil looks every inch to the Hollywood manner born.

She admits to being a bit baffled by every­thing that’s happened to her, telling the GG2 Power List: “I’ve hit a lot of jackpots consecu­tively in the last 10 years and that’s been very, very cool. But because I jumped around in ca­reers so much, I’m always in the deep end and doing a job that perhaps I’m not fully prepared for, so I have to scramble to learn and catch up. I survive by the skin of my teeth.”

Jamil grew up a north London girl, the bookish daughter of a former Pakistani model and an Indian father. A jazz lover, she won a music scholarship to an expensive private school in Harley Street but was nearly turned into a paraplegic by a bee that chased her into the path of a vehicle on Hampstead High Street when she was 17.

A year of paralysis, followed by a year on a Zimmer frame turned her from the lonely teen who lacked friends, into the (now) confident and outgoing young woman who decided to enjoy life and follow every avenue that opened before her. “I just wanted to go out and get a job and join the world because I felt I’d already missed so much,” she says.

For a while Jamil taught Eng­lish at an Oxford Street upstairs language school alongside Russell Brand. “I think it’s where we both learned to pre­sent, because you’re there teaching a bunch of peo­ple who don’t speak a word of English when they come to you,” she explains. “So solely by the art of mime for the first couple of weeks you have to teach them basic English.”

It’s a masterclass in performance training: “There’s something about it that just knocks all of your inhibitions out of you.”

One day she saw a beautiful Danish girl in Starbucks and frogmarched her to a model agency. “I didn’t know you got paid to do that, and they gave me a cheque – £300! I was 19 years old. I was like, ‘Jesus Christ, this is in­credible!’” A new career suddenly beckoned: “I was earning three grand a month,” says Jamil, freshly amazed even now at how life keeps rewarding her.

One night in a Soho pub after work, a TV producer told her of a national audition and slipped her an email address. Jameela sent over her CV and a funny video. “And I got called in, and a week later I was live on Channel 4.”

Four years presenting in a breathless and quirky manner there led to a Radio 1 DJ position, although Jamil admits she knows nothing about pop: “I didn’t like pop music, I still don’t like pop mu­sic, so that was a lot of me just blagging my way through… but also I liked the people. They were fun to talk to and wonderful to interview.”

So far, so showbiz. But Jamil has been taught several thought-provoking life lessons by her body – apart from being near-fatally run over, she was born partially deaf with compli­cations (labyrinthitis), suffers from asthma, coeliac disease and a dangerous peanut and shell­fish allergy. So when she found a lump on each breast and had a terrify­ing wait for a test result, she quit her Radio 1 job and went travelling for a year before landing in Los Ange­les with hopes of writing comedy.

She says almost all the “profes­sional” advice was that at 29, she was too old, too ethnic and too fat for Holly­wood – at one point, due to steroids for her asthma, Jamil had put on 70lbs: “I gained a Spice Girl” as she put it (but it all came off again without visiting the gym).

Her agent put her up for an acting job – ex­cept for junior school she had never acted, but she blagged her way in again and got the part. They were looking for “a freakishly tall Paki­stani woman with an English accent,” she jokes, although Jamil didn’t know what she was get­ting into, either. “It was a seven-year deal that I had to sign without knowing what the show was about, what the character was, who else was in it, no script, nothing. That’s how talent­ed [The Good Place writer-producer] Mike Schur is, that we all did it.”

Having landed on her feet in Hollywood, Jamil is still following her philosophy of being open to opportunities. “I’ve never had a plan, and I think that’s been the key to my strange, undeserved success. I’ve been open-mind­ed and I allow opportunities to come in via my periphery.”

There is a book on the way that takes what Jamil calls her “disasters” and uses them to offer advice to young women, and there are other TV projects.

“I love making documentaries,” she con­fides. “I’ve just made a two-part documentary for the BBC about consent” – a hot topic in light of the #MeToo movement, which Jamil says has made LA a much better place. “So, writing and hosting and interviewing are things that are still very close to my heart.” There’s another documentary in the pipeline “about our scandalous treatment of women over their size and appearance,” which adjoins her other main interest right now.

Jamil is launching her I Weigh movement as a foundation to shame the tabloid fat-shamers and expose the image-oppressive standards of the ad and fashion industries, in an attempt to stop the commercial exploitation of young women and improve their self-esteem. “This stuff really messed me up as a child and it real­ly messed up a lot of the women that I love the most in the world, as to how we look at our­selves, how we talk about ourselves,” she says. “It’s poisoned us from the inside out. And so now, when I see it, I’m going to call it out.”

It all began when Jamil picked an epic Twit­ter fight with Kim Kardashian for promoting weight-reducing lollies. Kim stopped doing it.

Jamil reveals that she refuses to be Photo­shopped on shoots: “We have to stop lying or we can’t complain about the fact that we’ve been caught out,” she reasons. She says she doesn’t want to “live off the blood and tears of teenage girls”.

She is someone with her head screwed on – there’s almost something motherly about her concern for the well-being of others. “I think I’m someone who prefers to be around some­one and helping them succeed,” she says. “Like pushing someone else into the limelight.”

And there’s plenty of limelight to go around.