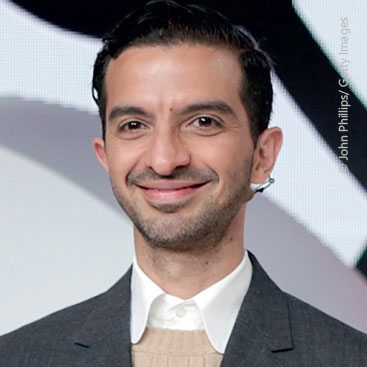 THE story of fashion outsider Imran Amed’s ascendancy to ultimate insider of the industry is hardening into business legend.

A fan-blog (its early version is still online) cobbled together solo on a living-room couch has become the ultimate fashion industry Bi­ble. The daily newsletter is read at dawn by everybody who is somebody – and it has all happened in a single decade, since 2007.

His parents had settled in Canada from Nai­robi, and the teenage Amed (who has dual Ca­nadian and British citizenship) arrived in Montreal from his home in Calgary to study business at McGill University. There, in the city’s cosmopolitan climate, he found himself seduced by the way clothes allowed people to express themselves and their inner lives.

He kept his wonder at the art, and more im­portantly, the business side of fashion alive in his heart while studying for a Harvard MBA. Then he worked as a McKinsey consultant for four years in London, his preferred home, where he developed a kaleidoscopic view of commerce and finance.

A fish-out-of-water life crisis in his late 20s sent Amed to an ashram in South Africa for an uncomfortably reflective fortnight, after which he completely changed direction, ready to turn what he called his hobby into his career (self-expression attracted him – he recently re­vealed he also studied acting).

“Fashion is a $2.4 trillion industry,” he says. “What $2.4 trillion industry would be happy with sycophantic fluffy reportage?” Investors were attracted by his highly-fo­cused and granular analysis of the fashion business, blended with the stylish and col­ourful appeal of that world. Soon there was an office, employees, a snowballing influ­ence… the rest is now history.

Slight of stature (which he seems to em­phasise by his taste in oversized knitwear), in­telligent and a data-sponge full of ideas and original intellectual angles, 43-year-old Amed is the Malcolm Gladwell of the fashion industry.

His contribution to fashion, through his magazine and “website” (for want of a better word to describe an online multi-media empire) The Business of Fashion – or “BoF” as it is universally known – is enormous. Amed has outdone Wom­en’s Wear Daily and Drap­ers in industry coverage while expanding and deepening the aesthetic elements of fashion journalism and insight to the level of cultur­al curation. Vitally, the BoF site itself is stylish and a joy.

Amed has bought hard-headed analy­sis to rag-trade fri­volity, profession­alising it while still adoring eve­ry facet of the fashion world. As well as reporting, BoF is now moulding the in­dustry, reflected in its influential BoF 500 list of the most important people in the business.

What has been ignored, left almost without appreciation, is Amed’s achievement in the currently parlous world of publishing. The big newspapers and magazines, from the New York Times to Condé Nast Traveller, are bleed­ing heavily from internet cuts and contusions.

Meanwhile, publishers such as Amed (and others like Rafat Ali of travel site Skift) are proving that publishing in its niche and multi­media incarnations can thrive as never before. The key, it appears, is to go deep instead of broad and master one subject, not skate over many.

Old-style magazines and publishers were loyal to (and editorially influenced by) adver­tisers. New-style niche publishing is loyal to its subscribers – it can be objective and inde­pendent and provide better, because unbiased and uncompromised, information:

“Sometimes brands expect influence over the coverage. And this is why I have prioritised making our subscription-based service possi­ble,” says Amed. “The reason we’ve moved this model around, having our subscribers pay for the content, is because it focuses our attention on satisfying those individual readers… Our accountability is to our community.”

The new strategy is to be 10 times better than your competitors, which is possible if you dominate a narrow niche with a depth of con­tent; then expand sideways. “We’ve gone from me writing 10 articles a month, to posting 40 articles a month; from 150,000 unique visitors a month to nearly one million,” he told GQ last year. “But I don’t believe our users want simply more con­tent. They want breadth. And quality. We could go into dif­ferent areas, beauty, wellness, technolo­gy – all these indus­tries are intertwined within fashion.”

In 2016, Amed received an MBE for ser­vices to fashion. More honours must surely await him.