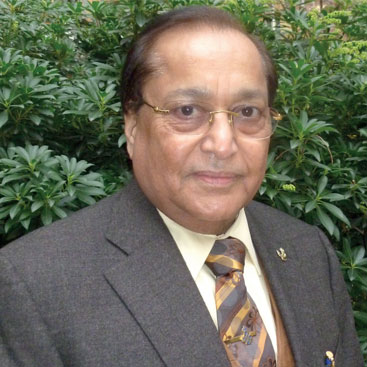 AN EXPERT in breaking into difficult-to-reach foreign markets, Dr Rami Ranger, chair­man of export powerhouse Sun Mark Ltd, ap­pears emminently suited to achieving one of his few remaining ambitions – to be a roving ambassador for British trade.

A high-profile supporter of the Tory party, in June this year he was named co-chairman (along with Zac Goldsmith) of Conservative Friends of India, a group dedicated to cement­ing ties between the UK and India. Dr Ranger, who has won the Queen’s Award for Enter­prise and International Trade a record five consecutive times, is expected to use his posi­tion to press for an improved trading relation­ship between the two countries after Brexit.

Indian high commissioner YK Sinha wel­comed Dr Ranger’s appointment and said he looked forward to working closely to further bilateral relations. Theresa May added that the Conservative Friends of India played an im­portant role in “supporting the flourishing friendship between the UK and India”.

Despite having voted Remain, Dr Ranger has said he believes the UK will be able to “forge new relationships” with countries like India, China and the US when it leaves the EU.

Notwithstanding Dr Ranger’s desire to boost international trade for the UK as a whole, Sun Mark has been a major beneficiary of the post-referendum fall in the value of sterling. Its ex­ports of private-label products and major brands now penetrate around 130 countries Combined turnover from Sun Mark, which fo­cuses on marketing, and its distribution arm, Sea, Air and Land Forwarding, is in excess of £200 million. Dr Ranger himself is valued at £190m in Eastern Eye’s Asian Rich List.

“With the weaker pound, we have gained a lot of extra business. People can afford to buy more from the UK,” says Dr Ranger.

He came to the UK from India in 1971 and was working as a store manager in Dixons when he decided to set up an export business – after noticing that foreign customers often needed help in shipping products back to their home countries. “I thought, ‘I can do that’, and I’m glad I did. You have to take risks in life. I left Dixons and started my own company from nothing.”

His initial focus on electrical goods, and he gradually diversified into grocery items. “There was a lot of demand for British super­market products all over the world, so I began collecting those and consolidating them into sea containers,” he recalls.

Dr Ranger approached big firms like Cad­bury, Unilever and Heinz and offered to export and market their products in developing and emerging markets such as Africa, the Middle East and the Caribbean. He carefully chose lo­cations where, for various reasons, the major producers didn’t feel able or willing to pene­trate. He secured agency agreements to sell their branded products in those places and his business “snowballed”.

As well as representing top companies – Sun Mark’s client list includes Nestle, PepsiCo and Kraft among others – it also has its own range of house brands, including Laser, Golden Country, Royalty, Robust, Bulldog, Pure Heaven and English Breeze. The bulk of its sales are through exports, but these own-brand prod­ucts are increasingly selling in the UK market. The company, which is based in Greenford, recently opened a business hub in Dubai and plans another in Miami, Florida, to serve the Caribbean Islands.

In recent years, Dr Ranger has been diversi­fying into property. Apart from his own apart­ment on the 59th floor of the 830m Burj Khalifa tower in Dubai, he has acquired a portfolio of hotels and commercial retail units, including Holiday Inns in Rotherham, Luton and Sitting­bourne; Crowne Plaza in Basingstoke; the Mercure in St Albans; and a boutique hotel, La Cartuja, in Marbella. He has also applied for planning permission to build a 109-bedroom Crowne Plaza near Gatwick.

Dr Ranger, who turned 71 in July, leaves the day-to-day running of the business to his son-in-law, Harmeet Singh Ahuja, who is chief ex­ecutive of both Sun Mark Ltd and Sea, Air and Land Forwarding. Nowadays, he spends much of his time lecturing to busi­ness students, expanding his hotels business and working on behalf of the Conservative party for whom he is also dep­uty treasurer.

Over the years, Dr Ranger has been active in raising the profile of the Asian community in the UK through initiatives such as the Pakistan India Friendship programme and British Asian Conservative Link, which he helped set up as a vehicle for encouraging more Asians to get in­volved in UK politics. Pointing out that Indi­ans didn’t get involved in politics in Kenya or Uganda, he says: “It’s very, very important be­cause otherwise people will make decisions for us, rather than we making the decisions which affect us.”

He feels that the Tory party has made huge strides over the last 30 years in becoming more reflective of multicultural Britain. “The party is totally changed and inclusive. We have a lot of Asian MPs, lots of Asian lords, Asian cabinet ministers – again, if you do nothing, you achieve nothing”. Dr Ranger’s business mantra is “I only suc­ceed when my customers succeed”.

His achievements have been recognised through numerous awards. He received a CBE in 2016 for services to business and communi­ty cohesion. He won the Institute of Director’s Director of the Year awards in 2012 and 2013, and Man of the Year at the GG2 Leadership Awards in 2014. The latter was presented by then prime minister David Cameron, who praised Dr Ranger as a role model for the Brit­ish Asian community.

In February 2015, Dr Ranger was made a Freeman of the City of London in recognition of his charitable work and his support for Brit­ish trade and industry. He has also been awarded an honorary doctorate from the Uni­versity of West London.

Summing up his twin passions for trade and his adopted country, he says: “We cannot think like little Englanders looking inward; we are a global player. Looking international is the only way forward…. We have connections with every country and enjoy more respect than any other country. I hope our nation gets out of these difficult times and we can emerge as a strong nation leading the world once again.”