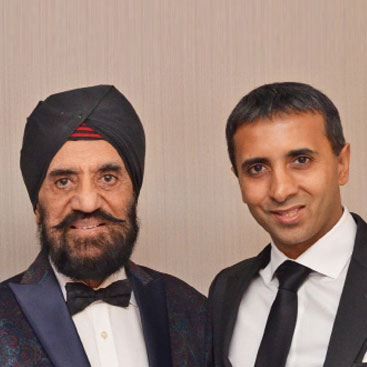 AS THE father and son team behind Vitabiotics, Britain’s biggest vitamin company, Dr Kartar and Tej Lalvani are used to media attention.

Nowadays, however, with ‘Prince of Vitamins’ Tej’s profile as a TV dragon going from strength to strength, not to mention his father’s author­ship of a well-researched book, stories about them are no longer just on the business pages.

“Dragons’ Den star Tej Lalvani buys stake in Airbnb management firm”, one headline said earlier this year. “Breath of Fresh Hair” ran another as The Sun speculated whether hair-boosting Vitabiotics products were behind the transformation of Tej’s formerly thinning locks into his current fulsome follicles.

Frivolous as such stories are, that won’t bother the Lal­vanis. Media references to their firm have multiplied since Tej made his debut on the hit BBC2 show Dragons’ Den in 2017. It raised the profile of Vitabiotics and did no harm whatsoever to the duo’s long-term goal of being “the number one specialist vitamin company in the world”.

Even Dr Kartar Lalvani, who founded Vita­biotics nearly 50 years ago and is still chairman, has been in on the act. A keen historian as well as businessman and pharmacist, the book he recently published, The Making of India: The Untold Story of British Enterprise – with its de­cidedly positive view of the Raj – has provoked heated debate. It led to his own bylined col­umn in the Daily Mail in which he criticised Oxford’s Balliol College’s removal of a portrait of the “great” viceroy of India, Lord Curzon, after undergraduates had branded him ‘a colo­nialist’. “In all my 60 happy years in this coun­try,” Lalvani told readers in August, “I’ve rarely heard any Briton utter a positive word about the British in India. And yet there is so much to be positive about…”

Meanwhile, on the business front, it has been another good year for the Lalvanis. Vita­biotics, whose biggest brands include Pregnac­are, Wellman, Wellwoman and Perfectil, is now a £300 million-a-year global company. Around one-third of sales are in the UK where its high-profile brand ambassadors, male model David Gandy, American actress and singer Nicole Scherzinger, and Tess Daly, co-presenter of Strictly Come Dancing, have helped build year-on-year growth.

Chief executive Tej is now focusing on ex­panding Vitabiotics’ £200m non-UK sales, which are currently spread around 100 coun­tries. With the Middle East already a major market, the US is the next big frontier, says Tej, who oversaw the launch in April of Perfectil in 8,000 American stores nation­ally with Walgreens, the largest pharmacy chain in the world.

In addition, there are big hopes around de­veloping China as a major market, particularly with Pregnacare. “Since China introduced its two-child policy it has been a big focus for us. The majority of pregnant women take supple­ments after they have conceived, which means Pregnacare could be very successful there. Parents in China also love British brands.”

Tej has recently also been taking the business into digital channels, including using social media strategies to leverage online growth op­portunities and engagement with millennials.

Vitabiotics was founded in 1971 by Dr Kartar Lalvani. He was born in Karachi in 1931, but forced to flee to Bombay (now Mumbai) with his family at the time of partition in 1947. “Without partition, perhaps… I would not have been so entrepreneurial,” he has said. “But be­cause we witnessed my father losing every­thing, it made us determined that such a thing would not happen to us.”

He moved from India to London in 1956, did a postgraduate degree in pharmacy at King’s College London, then a doctorate in medical chemistry at Bonn University in West Germany. He founded the business partly as a result of suffering from mouth ulcers, which he cured using a mix of vitamin C and powder from a diarrheal tablet. He named the product Oralcer, patented it, but failed to find backing, so set up his own company, Vitabiotics, to market it.

Tej, born in 1974, joined the business in his early 20s, but he didn’t go straight in at the top. “I wanted to understand the business from the ground up. I worked in every depart­ment from warehouse and quality control to design, marketing and business development.”

According to Companies House, turnover increased 25-fold between 1997, the year Tej joined, and 2016. So how did he help trans­form Vitabiotics into the major player it is to­day? “Be determined, be focused and believe in your product. You need the vision to drive the business forward or else you’ll be driven out of your own business.”

He says it was his wife’s idea to audition for Dragons’ Den. “It was all very new to me. I was a fan of the show, but it was a question of whether I wanted to deal with being in the public eye.”

So what qualities does he look for in an in­vestable entrepreneur? “I look to see how easy they are to work with – are they flexible, yet persistent? Do they understand all aspects of their business? Does the opportunity exist in the market space?

“You can’t judge a hopeful from the outset of the pitch. In the beginning you may not like it, but the entrepreneur starts to talk and you see how passionate they are about their prod­uct and how it tracks in numbers, then all of a sudden it becomes exciting.”