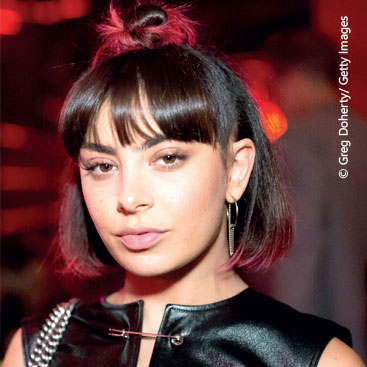 IT IS fair to say that Charlotte Aitchison, bet­ter known as the singer and songwriter Charli XCX, has had an eventful year.

One of her biggest successes, the electropop hit Boys, was placed on several critics’ list for Best Song of the Year. Boys also highlighted her influence in the industry. The music video, which has stacked up more than 92 million views on YouTube, starred an array of famous faces including Riz Ahmed, Joe Jonas and diver Tom Daley in un­conventional gender-reversal roles.

This year, it was announced the star had been nominated for four awards at the NME Awards 2018. She led with the largest amounts of nominations, alongside Green Light song­stress Lorde, securing nods for Best Track and Best Video for Boys, Best Mixtape for Pop 2 and Best British Solo Artist.

However, despite her more mainstream ven­ture into music, Aitchison hopes she is known for her avant-garde and experimental style. Admitting that she thrives in smaller venues, the artist said quirkier audiences is where her music goes down best. “The Taylor Swift shows have been really great, but it’s a differ­ent beast… I’m not a pristine pop performer,” she revealed. “I’m born to play in club envi­ronments, rave environments.”

Born to a Scottish father and a Gujarati In­dian mother, the 26-old-year initially began performing as a teenager. Her first gig was at a warehouse rave when she was 15. Aitchison, who used her stage name Charli XCX, which originated from a username she used on internet chatrooms, said the scene was unlike anything she’d seen before. “I had never been to a party like [that],” she recalled. “I didn’t know anything about rave culture, or club-kid culture, or gay culture – everything was a first that night.”

Since then, her career has appeared to go from strength to strength. Her reputation in the club scene meant she was noticed by sen­ior music people in the industry and her work has been widely praised by audiences and crit­ics alike.

First exploding onto the music scene when she provided vocals to 2012 hit I Love It by Swedish duo Icona Pop, Aitchison has since collaborated with a range of high-profile art­ists including Iggy Azalea and Tove Lo. As a lead artist, her songs Boom Clap and Doing It earned the popstar her first two Top- 10 singles on the UK Singles Chart in 2014.

However, not everything has been so smooth sailing for Aitchison, who currently di­vides her time between Los Angeles and Lon­don. She was criticised for her featured vocals on singer Rita Ora’s track called Girls. Released in May this year, the track described a same-sex relationship and was panned for its clichéd and exploitative use of lesbian imagery.

“I think the conversation and dialogue around this song is really important,” Aitch­ison said at the time. “I try so hard to be as in­volved with the LGBTQ community as possi­ble. Without that community, my career would not really be anything… I just really want to learn from this situation.”