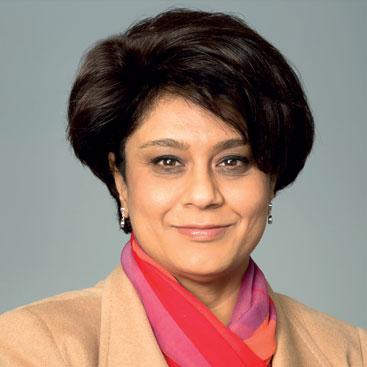 AS CHAIRMAN of Santander UK since March 2015, Baroness Shriti Vadera is the only woman to be head of a major British bank.

Her reputation as “someone who gets things done” was enhanced when as a treasury minis­ter, she worked with prime minister Gordon Brown in rescuing the British economy from the worst consequences of the 2008 global financial crisis.

Recalling that period, Shriti (she generally avoids calling herself Baroness Vadera) admits: “It gave me nightmares at the time. I worked with Gordon Brown and I was one of the au­thors of the bank recapitalisation plan… it was a very traumatic experience for the people and for the country. It’s an experience the world is still paying for.”

Shriti is talking to the GG2 Power List in her sixth-floor office in the huge glass and steel Santander headquarters in north London, and is off to New York straight after the interview. In the first nine months of the year, her work has taken her abroad 14 times – to the US, Aus­tralia, Singapore, China, Chile and several Eu­ropean destinations.

She does not have a typical day, not least be­cause she is also a senior independent director on the board of the global resources company, BHP Billiton, and a non-executive director of AstraZeneca, the pharma giant. She also makes time to act as mentor to businesswomen seek­ing to advance their careers, especially in-house at Santander.

As a judge for the FT/McKinsey Business Book of the Year, she does make it a point to read even the “fat books” because otherwise “it would not be fair to the authors”.

“I love reading, one of my favourite things,” she says. Actually, her own life would make a very readable book. It would cover being born into a traditional Gujarati family in the Ugandan capital, Kam­pala, on June 23, 1962, and being brought up until she was eight in Jinja on the shores of Lake Victoria; the flight to India with her fam­ily and attending schools first in Bombay (now Mumbai) and then in Bangalore.

The next chapter would include coming to school in England at 16; and spending 14 years in the City with UBS Warburg after reading PPE (philosophy, politics and economics) at Somerville College, Oxford.

Then would follow the fateful meeting with Brown who shared her passionate views on debt relief for the world’s poorest nations, in­cluding notably Uganda; and being ennobled by him so she could serve as a minister with the rank of parliamentary under-secretary, first at international development and then in the department for business, enterprise and regulatory reform as well as the cabinet office.

So what could have been the worst-case sce­nario after the 2008 global financial crisis? “Banks did go bust but the consequences could have been like the Great Depression in the 1930s,” she says.

“The immediate risk was very clear and ob­vious, but there was also the longer-term risk of a depression which a lot of people around the world were conscious of – (people such as) Ben Bernanke (chairman of the US Federal Re­serve), central banks and G20 countries. It was a time of enormous international coordination for a sadly very brief period. I am glad we were a part of leading that (rescue).”

She was the right woman at the right time. It is widely recognised that Shriti helped Brown persuade fellow G20 leaders to fund a $1 trillion liquidity package to stabilise the global economy.

She cannot be persuaded to say that had there been more women in boardrooms, the fi­nancial crisis might have been averted. But what she repeatedly warns against are the dangers of “group think”.

“I subscribe very strongly to the importance of diversity of thought, particularly in board­rooms and in organisations to ensure that you don’t fall into a trap,” she says. “Whether that would or wouldn’t have (prevented the crisis) is too sweeping a generalisation to make.”

This year she has delivered 20 keynote speeches, and sometimes refers to two books when addressing bankers. “The Hour Between Dog and Wolf by John Coates is a book by somebody who used to be a trader in Wall Street and became a neurosci­entist at Cambridge. He tested tes­tosterone levels and found that trading floors dominated by young men tended to accentu­ate a cycle of highs and lows. A more diverse trading floor per­formed better over the long term.”

The other book, Margaret Heffer­nan’s Wilful Blindness, examines the question: “Why do human beings in all formal and informal types of organisations tend to gravitate to­wards like-minded people? You are comfortable having around you people who are similar to you but therein lies the danger because there is no questioning – and questioning is actually an uncomforta­ble thing.”

But being able to question the decision-mak­ing process is also es­sential. This is why she urges employers to recruit people “outside of your comfort zone”. She argues that “diver­sity is an insurance policy against group think”.

She finds inspiration in a famous speech made by the former president of the United States, Theodore Roosevelt, at the Sorbonne in Paris on April 23, 1910.

One notable passage referred to as The Man in the Arena, says: “It is not the critic who counts; not the man who points out how the strong man stumbles… The credit belongs to the man who is actually in the arena… if he fails, at least fails while daring greatly, so that his place shall never be with those cold and timid souls who neither know victory nor defeat.”

This strikes a chord with Shriti: “I have al­ways wanted to make a difference and if you want to make a difference you are not going to get it right all the time – you have to be in the fray trying to do it and the best you can do is try. It is better than not trying.”

She was born into a well-off business family but the pov­erty she witnessed both in Af­rica and in India strengthened her determination to make a difference. Her earliest mem­ory from when she was four is of her Ugandan ayah (maidservant) crying because she could not afford the school fees for her children who all happened to be Shriti’s playmates. The woman who would negotiate debt relief for Uganda 30 years later resolved the problem by persuading her grandmother to pay the fees for the ayah’s children direct to the school, thereby bypassing her drunkard husband.

In Bombay, she was shocked when she en­countered beggar children who had been “maimed and disabled in some way in order to enhance their earning power”. In Bangalore, she attended Sophia High School, a convent school run by nuns who “were very important in forming my values”, she says.

She left Uganda for India with her parents and her brother nearly a year before the country’s president Idi Amin announced on August 7, 1972, that he was giving all Asians 90 days to leave the country. The early departure happened “because my grandfather was a very prescient man and believed this (the mass expulsion) was coming”.

After eight years in India, she ar­rived “stateless” in England. She could enter the UK because “my parents were born in the British Empire” making her eligible to apply for citizen­ship as a de­pendent. The school picked was Northwood College for girls “because I had an uncle staying there”. Her head­mistress assumed Shriti would struggle with English and wanted to drop her a year. When she refused, her headmistress decreed that the newly arrived Indian girl would have to sit mock ‘O’ levels for which she had barely two weeks to revise.

“I felt the weight of the nation in terms of proving I could do it,” Shriti remembers. “It was the hardest I have ever worked in my life.”

It was again her decision to apply for Ox­ford from a school which did not possess much of an Oxbridge tradition. Luckily for her, the headmistress chose to take a sabbatical and was replaced by her deputy.

“She was fantastic to me,” says Shriti, whose parents wanted her to go to a non-residential university so she could live at home. It was the new head who encouraged her to sit the en­trance exam for Oxford, and, after she was ac­cepted at Somerville, then an all-girls’ college, persuaded her doubtful parents to let her go.

At Oxford, “I feel it was probably my biggest time of discovery – I had a great time.” She is today an honor­ary fellow at Somerville. “Some of my closest friends are from that period.”

After university she applied for only two jobs – the BBC World Service and UBS War­burg. Working on debt relief for Uganda meant spending lengthy periods in Kampala from 1989 onwards. But cutting out the corrupt re­cipients of foreign aid so the money could be spent instead on sending children to school put Shriti personally in danger. “I remember getting a phone call, ‘We won’t kill you but we will maim you.’” Her bosses in London were reluctant to send her back until “the governor (in Uganda) gave us his personal bodyguard”.

It was an emotional time returning to the land of her birth which her family were once forced to flee: “Uganda is very beautiful. But it was full of massive potholes; roads and build­ings were all destroyed after years of civil year. I came back to the house where I was born. These experiences were so formative. They were the making of me.

“Possibly this is a controversial thing to say – what was done (expelling Asians) destroyed the country but there was a lot of poverty, a lot of inequality and a lot of wealth. The professions were dominated by white Europeans, business was dominated by people of Asian origin and there was nothing being done for black Africans. Maybe you could see where it came from – it doesn’t mean that the response was correct.”

She was persuaded by Brown to go into gov­ernment (which involved absorbing a massive drop in her earnings): “I met him campaigning on debt relief – that was our link. I worked with Oxfam and others and they created the Jubilee debt campaign which I supported. When I got into the treasury we got proper debt relief.”

Uganda was the first of 42 countries to get debt relief, with the decision ratified by the In­ternational Monetary Fund (IMF). “I remem­ber standing at the back of the hall of the IMF building in Washington. I didn’t realise but I was crying. Yes, it had happened, a full circle of your life in a way.”

How would she define her identity today? “I feel very British,” she says, but adds, “I think inevitably we become a mixture. In many senses it is the best of all worlds.”