Bafta-winning actor Adeel has moved into the big league 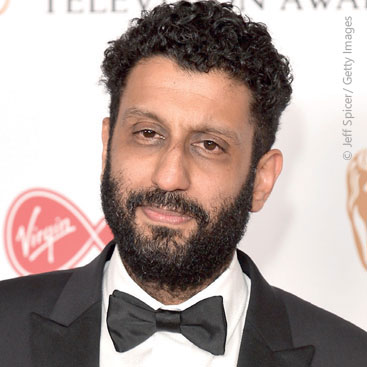 BRITAIN’S first non-white best actor Bafta winner – for the 2016 BBC drama Murdered By My Father – is now busy on both sides of the Atlantic.

His first prominent part in a US feature film came in Kumail Nanjiani’s hit comedy The Big Sick last year. Although the film was helmed at a producer level by US com­edy supremo Judd Apatow, the film was essentially a budget indie.

Now, Akhtar has moved into a bigger league, and can be seen in Murder Mystery, alongside Hollywood stars Adam Sandler and Jennifer Aniston.

The Netflix original did not have a broad­cast date at the time of going to press, but was already garnering a lot of press. The story re­volves around a New York billionaire being bumped off while on vacation in Italy, and a cop and his wife from the Big Apple becoming prime suspects. It isn’t clear what role Akhtar has in the film, but he has been spending time in Los Angeles and his wife, Alexis Burke, a documentary filmmaker, and son Arlo, who is two, have been frequent visitors from their south London home. They finished shooting in the summer in Italy.

Akhtar’s penchant for comedy was bolstered by a lead part in Swimming With Men this year – a film about a male synchronised swimming team, released in the summer. Many described it as a “Full Monty in speedos”.

Laid-back and discursive in interviews, Akhtar has noticed the predictive uptick in jobs coming his way since his 2017 Bafta. Next year he stars in a TV version of Les Misérables and will reprise the role of Monsieur Thénardier, one of the ug­lier characters from Victor Hugo’s 19th century novel. Adapted for the screen by the iconic writer, Andrew Davies, it will be one of the centrepieces of BBC drama early in 2019.

Akhtar, who is the son of a Pakistani father and a Kenyan mother, first studied law to placate his father. His parents met working at Terminal 3 in Heathrow – his dad was an immigration officer, while his mother dealt with passengers arriving at the terminal. His father retrained as an immigration lawyer and was ambitious for his son to get on, send­ing him to the fee-paying Cheltenham College.

Akhtar has recounted how he was one of just “two or three brown people” in school and that most of the other parents turned up to the Open Day with picnic hampers full of English delicacies, such as strawberries and cream. His parents brought things such as shish kebabs.

He initially enrolled on a law course at Ox­ford Brookes University but realised it just wasn’t happening for him. So Akhtar dropped out and after deciding to give acting a proper go, successfully won a place at the prestigious Actors Studio Drama School in New York.

Akhtar had a passion for acting since he was in school. Rejected for a part in Hamlet at Cheltenham College, he had staged Harold Pinter’s The Homecoming with a group of friends and teachers complimented him on his acting and the whole produc­tion. He hails it as one of his most satisfying moments.

But Akhtar almost never made it to America. He was mistaken for a potential terrorist – he was al­lowed to fly to New York but his flight was tracked by fighter jets. When it landed, Akhtar was removed from the plane by the FBI and driven handcuffed to the main terminal for questioning. He was de­tained at the airport for some hours be­fore being allowed to go and continue his trip to the US.

Akhtar did odd jobs to keep himself going on his return from the US, but wasn’t exactly fighting off the offers. At one point, his father even suggested meeting a man he knew in Pa­kistani TV, so Akhtar went as far as to audition for a news anchor role there, but it wasn’t to be.

He has admitted to drifting – for four years post his acting course, work was patchy and little of it was in his chosen field. He binged on drink and has referred to this time in his life as “intense” and “sad”.

His first big acting break changed the dy­namic – he was one of stars of Chris Morris’ risqué Four Lions in 2010. Essentially a film about four inept British jihadists, it won criti­cal acclaim and proved a box office hit.

Akhtar has recognised that his ethnic roles have put him in the shop window, while at the same time he, like any other actor, does not want to play lazy stereo­types that pander to general prejudices. He is conscious of the wider repercussions of playing a role say, as a Muslim, though he treats the character on paper as he would any other part.

He appreciates that progress has been made and that his appearance (and experi­ences as an ethnic minority) allow him a way into particular roles. He has spoken about identity in interviews – he was a de­vout Muslim in his youth, when his parents really wanted him to be an Englishman but with a grounded (and secular) understanding of his culture and heritage.

Still at school, he fell out of Islam and into very English ways of a sort: ba­con and beer started to feature in his diet, and he got into listening to indie music and John Peel on Radio One.

His Instagram account is full of pictures of his photogenic young son, and more recently, his celebrity hangouts and friends. Akhtar recognises just how far he has come – he is probably one of the best examples of someone whose life just over 10 years ago looked quite short of even the idea of comfortable.