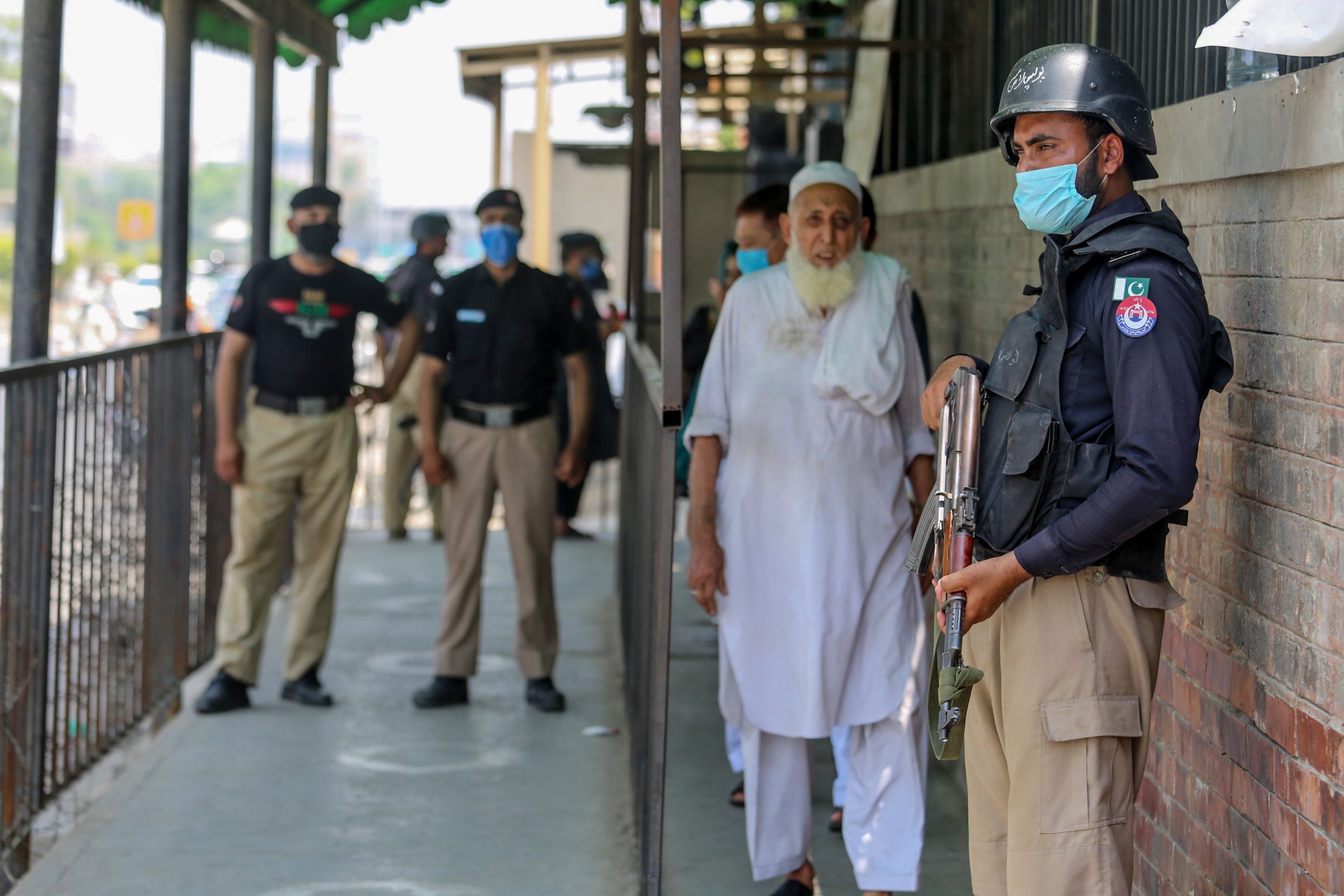 Security personnel (L and R) stand guard outside the district court building following the killing of a man allegedly accused of blasphemy in Peshawar on July 29, 2020. - A man from a persecuted Islamic sect was killed by an assailant in a Pakistani courtroom on July 29 ahead of his hearing on blasphemy charges, police said. (Photo by - / AFP) / To go with 'PAKISTAN-UNREST-RELIGION-MINORITY' (Photo by -/AFP via Getty Images)

Faisal Khan, a 15-year-old Pakistani, beams for selfies with lawyers and police. Thousands hail him in the streets as a “holy warrior.”

His claim to adulation? Allegedly gunning down in open court an American accused of blasphemy, a capital crime in this Islamic republic.

Khan is charged with murder, which also carries a death sentence. But while lawyers line up to defend him, the attorney for Tahir Naseem, the US citizen, has gone into hiding.

The teen, according to officials and witnesses, got through three security checkpoints on his way into a courtroom in the northwestern Pakistani city of Peshawar on July 29, pulled out a pistol and fired multiple shots into Naseem, 57, at a bail hearing.

Naseem died on the spot, onlookers spattered with his blood.

His killing grabbed global headlines, put a fresh spotlight on Pakistan’s blasphemy laws and drew criticism from abroad, even as many in the country praised the shooter. The United States and human rights groups decried the killing and urged changes to Pakistan’s blasphemy statutes, among the harshest in the world.

Closer to home, Khan is a hero.

“It’s one of those cases where everyone wants to be his lawyer,” Inamullah Yusufzai, who represented Khan at his first court hearing last week, told Reuters. Yusufzai said lawyers from across Pakistan had called to defend Khan for free, to support what they see as the justified killing of a heretic.

The case has not reached the stage for Khan to enter a plea.

Thousands rallied, calling for Khan’s release. Delegations of well-wishers – lawyers, clerics, local politicians – have visited the Khan family home in Peshawar to congratulate the family. He has received messages of support from the Pakistani Taliban.

A selfie shot by Elite Force police guards in a van escorting Khan to court after his arrest was shared widely on social media. Wearing all white, the teen grins broadly. Several officers smile, one gives a thumbs-up.

A senior police official, who said the force had looked the photo, said it was authentic. Reuters could not independently confirm its authenticity.

Another selfie shows a crowd, some black-clad lawyers, escorting a beaming Khan into court.

The U.S. State Department, in an unusually blunt statement, said Naseem “had been lured to Pakistan from his home in Illinois by individuals who then used Pakistan’s blasphemy laws to entrap him.”

It called on Pakistan to reform its blasphemy laws and prosecuting Naseem’s killing.

Pakistan’s Foreign Ministry says a special team is investigating the case and it “will be dealt with in accordance with the law.”

But prosecuting Khan and any potential accomplices will be an immense challenge.

In blasphemy cases in Pakistan, “an accusation becomes a death sentence, whether carried out by the state or by mobs or vigilantes,” Omar Waraich, head of South Asia for Amnesty International, told Reuters.

The rights group said in a 2016 report, “Pakistan’s blasphemy laws are often used against religious minorities and others who are the target of false accusations, while emboldening vigilantes prepared to threaten or kill the accused.”

In 2011, the governor of Punjab, Pakistan’s largest province, was killed by his own police guard for offering support to a Christian woman facing blasphemy charges. His killer was tried and awarded the death penalty, but not before thousands rallied for his release and rioted after he was executed.

Naseem was born in a village outside Peshawar but had long lived in the United States, according to clerics and locals who knew him.

He often visited his village, where he expressed views that “upset locals,” said Wajid Ali, a cleric who runs a seminary there.

Naseem’s statements landed him in prison several times, said Ali and another local who knew him Naseem. In those cases, they said, the intervention of locals, who believed Naseem was mentally unstable, got him released.

“On the internet, he kept saying things like, ‘I’m a messiah, or a prophet,’ and that caused great trouble in our village,” Ali said.

Naseem set up a website proclaiming himself a messiah, with a link for people to pledge allegiance to him. On LinkedIn, he described himself as “Jesus’s second coming, reviver, Prophet.”

His distance from Pakistan kept him safe, even as he reached out to its Islamic seminary students to preach his messianic call.

In 2018 one of those students convinced Naseem to travel to Pakistan, where they met at a Peshawar shopping mall, according to court documents seen by Reuters.

“He came thinking this student will believe him and others will join his call,” Ali said. “But the student had already told the police. They were standing nearby in plainclothes and they arrested him.”

Naseem was charged with denigrating the Koran and the Prophet Muhammad. Two years later, awaiting his bail hearing surrounded by police and lawyers, he was gunned down.

News
US issues notification for sale of F-16s to Pakistan