The UK boasts one of the most well-established gaming markets in the world, standing as one of the biggest in terms of game revenues. Sitting only below Germany, the Republic of Korea, Japan, the United States, and China – all but one of which host far larger populations – the UK produced over $5.5 billion in 2020 from its games market. With the entertainment medium so popular for such a long time, several world-class studios have emerged from the country, including Rockstar North, Codemasters, and Sports Interactive.

Now, with India rapidly muscling into the whole range of modern tech industries, UK-based companies have been eager to invest in the developing markets. Of these, gaming has been the most impressive in its rise to prominence, with the subcontinent not only seen as one of the largest in the world, but also the one with the most potential. Given that India has an estimated smartphone population of over 700 million people, and a nation of over 1.36 billion, it’s easy to see why so many experts salivate over the prospects of gaming in the country.

So, how does the long-established gaming scene of Great Britain compare to the fledgeling, but enormous, scene in India?

As noted, the UK is one of the largest contributors to global games revenue, clocking in with over $5.5 billion last year. Gaming via all platforms is very popular, with the country being coveted as a key market at the premium end of gaming – with state-of-the-art computer gaming hardware and the latest consoles. Interest in gaming is at an all-time high, with roughly 32.4 million of the 66.7 million Brits claiming to play games. Furthermore, gamers are nearly evenly split regarding sex, with 48 per cent of gamers being female. Powering the market is its largest gaming demographic which is, surprisingly, the 21- to 35-year-old demographic.

The UK’s leading gaming group appears old due to the general perception of gaming being for younger people. In India, a young country in itself with 75 per cent of its population being under 45-years-old, the primary online gaming demographic is 18- to 24-year-olds – a group which makes up 60 per cent of the total. Such a young and tech-savvy nation, India was always primed to move quickly into gaming when the opportunity presented itself. That opportunity came with the rise of low-cost smartphones and the cheapest mobile data rates in the world. Last year, the total number of game app users in India was said to cross 300 million, with India’s online gaming industry set to grow exponentially from its $1.1 billion valuation in 2019.

Free gaming is a major driver

Regardless of how widespread the latest and perceivably greatest gaming tech is in a nation, people are automatically drawn to the ‘free’ label. The idea of gaming only being accessed at a premium is long gone, primarily due to how the mobile app stores monetise their games. In 2018, it was found that free-to-play gaming revenues worldwide eclipsed $82 billion. $58.5 billion was derived from mobile, $21.6 billion from PC gaming, and $2.1 billion from consoles. Spun geographically, Asia contributes 60 per cent of all free-to-play revenues, while Europe brought in $41.8 billion less than the leading continent. Now, primarily driven by free-to-play mobile titles, gamers have come to expect decent entertainment without an upfront price.

The mass appeal of free gaming has spread to all corners of the medium, with even the games entirely based on the paying and winning of real money needing to offer games for free. In the UK, slot games are big business online and on-land, but it’s the free slots that have seen the most significant upticks in popularity of late. Traditionally, testing slots costs money, and you don’t know if it’s a preferable game until you’ve tried; as such, the extensive collection of free slots from major developers allows for players to both be entertained and try before they buy, in a sense. Gamers can try the likes of Bear Tracks, Aztec Glory, or even Jimi Hendrix, and enjoy the experience without paying first. And over the last five years, the Indian market has shifted from being immersed in free Teen Patti to exploring the other free mobile games on offer – ones more akin to video games.

Free gaming is a colossal contributor to game markets around the world, with people seemingly being happy to download a game, play it for free, and then pay to get virtual goods, like premium items, online passes, and time wall removers. In India, the freemium model is the primary reason why gaming is picking up so rapidly, with smartphones being the gaming device of the nation. Close to 10 billion games were downloaded through 2020 in India, making it a world leader, with the vast majority of those being for free games. In the UK, however, only about 23 per cent of people play games via a smartphone, per 2019 data, and yet in-app purchases help to make the country a major contributor to revenues. On Apple devices in Great Britain, the likes of Coin Master, Candy Crush Saga, and PUBG Mobile often rank atop the highest-grossing apps chart. In India, via Androids, PUBG Mobile used to top the charts, but now it’s the similar Garena Free Fire, as well as Coin Master, and Candy Crush Saga.

The love of quality free games remains consistent between the nations, regardless of how much more revenue or the premium preference of the UK may be. Going forward, India will only become more of a gaming powerhouse. Companies will undoubtedly be more and more inclined to break into the growing market with more localised options, thus increasing interest, revenues, and the number of gamers. 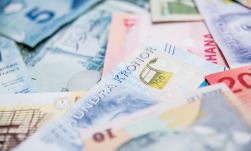 Business
Which Eastern economies/currencies are expected to do well this year?

Uncategorized
What Can Make You Fail a Background Check for a Job?