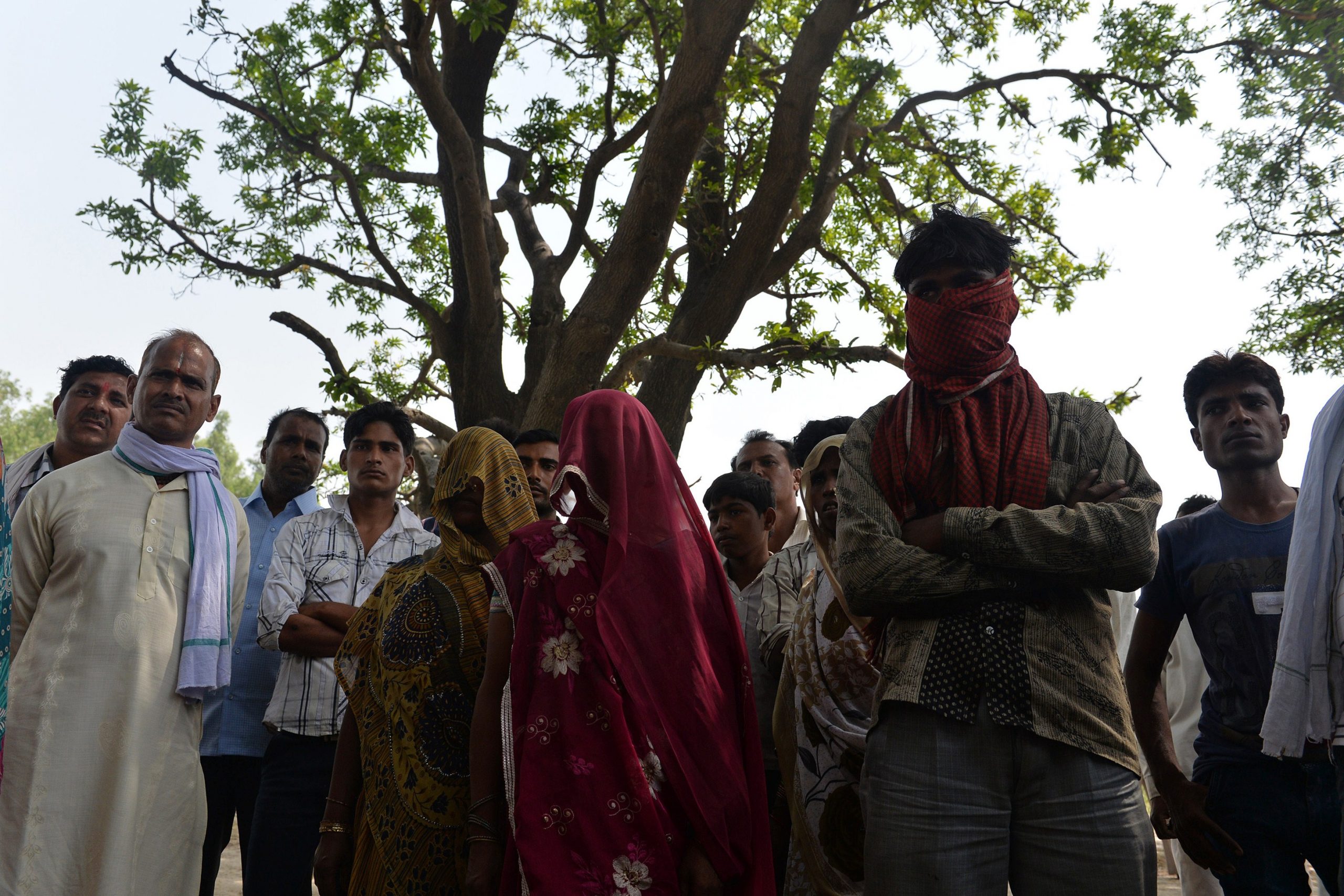 THE INSIDE STORY: Villagers, including the mothers of Padma and Lalli, stand in front of the tree where the two girls were found hanging in Katra Shahadatgunj, Uttar Pradesh, on May 31, 2014 (Photo credit: Chandan Khanna/AFP via Getty Images)

THE author behind a true-crime book focusing on the alleged murders of two teenagers in India has revealed her motivations for covering the story, claiming she was “compelled” to understand the level of violent crimes against women in the country.

The Good Girls: An Ordinary Killing explores the death of two young girls (known as Padma and Lalli in the book) in 2014. The cousins were found hanging from a mango tree, not far from their home in Katra, a small village in the Budaun district of Uttar Pradesh state in north India. It was claimed the girls, who were 14 and 16 years old, respectively, had been gang-raped and murdered.

The case made international news after a photograph of the teenager’s bodies went viral. Sonia Faleiro’s book returns to the scene of the girl’s death in Katra, exploring the run-up to their alleged murder and the aftermath. It analyses police interviews, autopsy reports, media coverage and features insights from the girl’s families, neighbours and various onlookers.

“Violence against women is not an Indian problem or an Asian problem – it is a global issue,” Faleiro told Eastern Eye. “It’s one of those issues that we have never been able to completely dissolve. But I think the fact that it was happening in India compelled me to understand why there were so many crimes and why so many people were affected. I wrote the book seeking answers.”

Faleiro first heard about the case after she came across the gruesome photo on Twitter of Padma and Lalli hanging from the tree. The image – and the age of the victims – had a huge impact on the journalist. “Once you see something like that, you can’t forget it,” she said. “When I saw that picture, and I realised how very young they were, I decided this particular case would be the centre piece of a study or an investigation that I would do into crimes against women.”

The case came just two years after the fatal gang rape of a 23-year-old woman in New Delhi. The physiotherapy intern was tortured in a private bus in which she was travelling with her male friend. She later died of her injuries. The murder made international headlines and sparked national protests.

“If you ask any Indian, especially a woman, she will remember exactly where she was (when she heard of the intern’s death),” Faleiro said. “I was in San Francisco with my husband when I read the young woman had died and I was devastated. I think the reason was that I had grown up in India, fearing violence, but never experiencing it. It felt like that could have been me.”

Faleiro lived in Delhi for 25 years and admitted that the fear dictated everything about her life – what clothes she wore, where she could go, how she would get there and what time she would come home. “Everything about my life, outside of my home, had to be carefully weighed, to ensure that I would be safe,” she recalled. “It really did define everything that a young woman did outside the house.”

Friends who had been assaulted on public transport and the streets told Faleiro to carry chilli power in her purse, to use against attackers. Another told her to carry a knife. However, the cautionary measures were not deemed unusual – it was just part of the everyday life of a woman in Delhi. “At the time, I never really knew any other way,” Faleiro, who now lives in London, said. “So it’s not something that I thought about. I didn’t consider the unfairness of it.”

Triggered by the mass protests and international outrage over the murder of the intern, known as Nirbhaya in the press, the Indian government introduced a number of significant laws. These included a mandatory minimum sentence of 20 years for gang rape, and six new fast-track courts created solely for rape prosecutions.

Despite the changes, women in India still remain fearful. A 2018 poll by the Thomas Reuters Foundation declared India as the most dangerous place in the world for women. And although Faleiro said it was important not to undermine the progress that has been made, she does not believe women are any safer than they were prior to 2012.

“I believe that’s because in order for crimes to be reduced, the criminals have to be caught, the justice system has to function, and that punishments need to be meted out,” the author explained. “In a lot of cases, people commit the same crime – whether it’s rape or another form of sexual assault – nine or 10 times before they get to court. We need better policing, more equipped police officers and a stronger criminal justice system.

“These are fundamental areas that have not been strengthened to any significant degree after 2012. Therefore, I would have to say that while there have been changes, they have not been  enough to make a significant difference to the problem.”

Over the course of three years – from 2015 to 2018 – Faleiro repeatedly returned to Delhi and Uttar Pradesh to investigate the case. Although one of India’s most powerful (it sends the most number of MPs to parliament) and largest states, Uttar Pradesh has the notorious reputation of also being one of the most dangerous. According to the National Crime Record Bureau’s Crime in India report in 2019, 405,861 cases of crimes against women were reported in India. The highest number of incidents (59,853) took place in Uttar Pradesh.

“(Uttar Pradesh) is a harrowing place, even by the standards of harrowing places,” Faleiro admitted. Throughout her time there, she had hired a driver to escort her around the local areas. On one occasion, the driver suggested that she go back to her hotel. It was only 4pm and Faleiro had hours of work ahead of her, so expressed reluctance to return so early.

“He said, ‘you can’t be out in the evenings’,” she recalled. “And by you, he didn’t just mean me as a woman – he meant anybody who valued their life. It’s a place with a horrifying mythology around it which is, unfortunately, rooted in actual, terrible happenings.”

While working in the state, the journalist ensured she took all the safety precautions she could. She stayed in the most reputable hotel she could find, hired a driver with a sturdy car and carried pepper spray with her. Faleiro would also inform a few people about her whereabouts at all times. “If you focus on your fear, then you’re not going to get a lot done,” Faleiro said. “I took practical steps to protect myself, but without allowing the fear to overcome me because then I would not have been able to write the book.”

It was not the only challenge that Faleiro came up against. Members of the families and neighbours involved in the sisters’ case kept changing their stories. The conflicting accounts made Faleiro’s investigation challenging, as she attempted to put the pieces of the story together. “It was a case where everybody involved on the night (of the girls’ disappearance) had a differing story and a different experience,” she recalled. “In the first few years of the reporting, it was impossible to come up with one narrative.”

Repeatedly returning to Katra helped her put the story together, she said. It also allowed her to “widen her net” and speak to individuals who may have otherwise been ignored. “We tend to focus on the families of the victim, and the alleged perpetrator, but they are not the only ones who see and hear things,” she explained. “By talking to more people, as many as I could, I was able to put together the pieces.”

As well as the UK, The Good Girls is also being released in India. Faleiro admitted there aren’t many books in India relating to violence against women. It is a subject that is too familiar and hard to bear, she reasoned. However, she hopes people will be drawn to the stories of the girls. 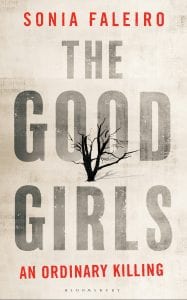 Furthermore, she wants to initiate discussions of how victims are ultimately let down by the system. She said: “Whether it is at the investigation, the post mortem or when the case goes to trial, I do hope people use this opportunity to talk about how women are routinely failed by the various systems and by the people who are supposed to support them.”

The Good Girls: An Ordinary Killing by Sonia Faleiro is available to buy from Amazon and all good book retailers on Thursday (21). 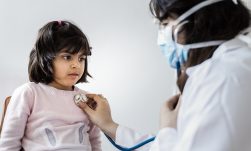 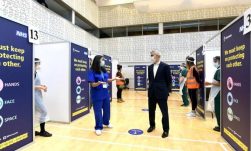 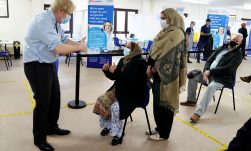